15 Tweaks to Make When Moving to Lion or Mountain Lion

In the last two iterations of OS X — Lion and Mountain Lion — Apple has been making some bold moves in respect to the way the computer operator interacts with the machine. Bold in the sense that the changes are quite a departure to the way in which people have been used to using OS X in the past.

While change can often be positive, some of us take a little time to adapt and are perhaps more resistant to change. This article examines some quick fixes to help you make Lion and/or Mountain Lion a little more familiar.

Change for the Sake of Change?

Sometimes it might feel as though things are changed just for the sake of change and not for any positive reason. Encountering and accommodating changes can be difficult if one is used to a particular way of working, and this is especially so when it comes to computer operating systems.

The reason for Apple making some major changes in Lion and Mountain Lion is likely a result of the success of their mobile devices. The iPod Touch, iPhone and iPad all sell in huge numbers and are often the first experience of an Apple product for many consumers.

Apple wants to make the transition from iOS to OS X as intuitive as possible for the new Mac owner, but the jury is still out on whether natural scrolling on iOS is right for OS X, so let’s start with that as our first tweak.

Natural Scrolling is, if you own an iOS device, something that you are already familar with, so why is it so difficult on OS X?

Now, if you view a webpage on your desktop and you move your finger on your Magic Mouse (or two fingers on your Magic Trackpad) you will see the document (webpage) move in the same direction if you are using Lion or Mountain Lion, or in the opposite direction on earlier versions of OS X.

For some people, pushing up on the mouse or trackpad — to push the document up — can be confusing. Even if they are seasoned users of iOS devices where the action comes naturally, they remain confused when the same happens on OS X.

The reasons for the confusion are most likely to be muscle-memory and interface-disconnect. All those years of performing an action in a particular way to acheive a response becomes second-nature - this is muscle-memory.

Likewise, touching directly on a screen and pushing something comes naturally; it makes sense. Touching a trackpad, or mouse, that is remote from your screen does not feel the same. (In pulling down to move content up we can liken the mouse to a cog, or we can think of the scrollbars - it is the scrollbar that we are pulling down rather than the content).

This is all a rather in-depth way of saying that so-called "Natural Scrolling" feels a little unnatural for some and can be changed by going to the System Preferences > Mouse to remove the tick from the Natural Scrolling tickbox.

Remove the tick from the tick box to disable 'natural scrolling' and revert to normal scrolling behavior.

A long-standing joke among users of PCs is that the Mac’s mouse only has one button. (The fact is that Macs have been capable of the secondary click function right back to at least Mac OS 9).

System Prefences > Mouse is the place where you can enable the secondary click on your Mac’s mouse. 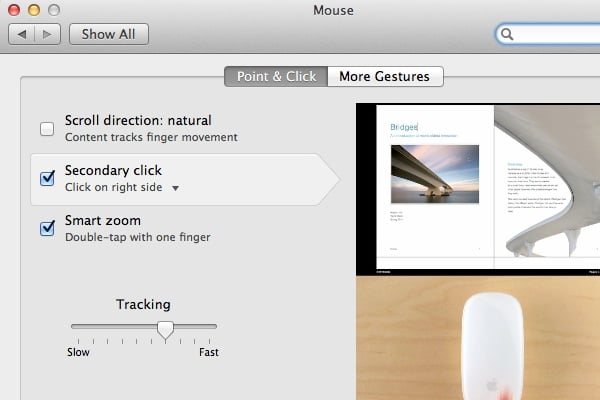 You can enable the secondary click on your Mac's mouse under System Preferences > Mouse.

Have you been using Safari and wondered why the page seems to slide from side to side when you scroll up or down? If so, this is the mouse gesture to swipe between pages, which is enabled by default.

For people using an Apple Magic Mouse — with its touch sensitive surface — this may be more of a hindrance than a help. If so, you can disable the gesture here.

If you are experiencing wobbly web pages, try disabling the 'swipe between pages' function under More Gestures.

Another major change to the OS X interface, between Snow Leopard and Lion/Mountain Lion, is the removal of the scrollbars at the side of webpages, documents or content that is longer than can be displayed at once.

This is a major visual change and one that fits with the idea of Natural Scrolling. You are moving the content not the scrollbars.

If you have been using desktop computers for some time, then the loss of scrollbars may be a step too far. By going to System Preferences > General you can choose to show scrollbars only when scrolling or to show them all of the time. The latter setting restores a visual clue to the User Interface (UI).

By showing scroll bars all of the time, you can tell quickly and easily if their is more content than can be displayed at once.

If you miss the ability to double-click the title bar of a window in order to minimize it, you can enable this functionality in System Preferences > Dock. 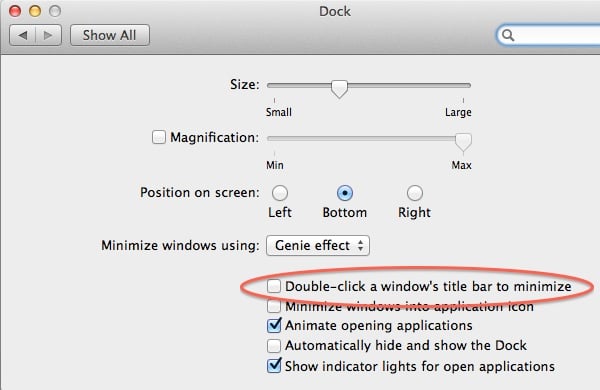 In an effort to simplify the UI, Apple seems to have removed a lot of information that was useful. There are three main items, useful to people using the Safari Browser, that are disabled by default.

The status bar is useful in that it can show you the destination URL of any hyperlink over which you hover your cursor. An easy one to enable, when in Safari just hold down the Command and / keys together. These keys toggle the status bar on or off. Alternatively, you can go the the Safari View menu in the menu bar and select the option from here.

Revealing the Safari Status Bar - it can show useful information.

Journeys are great but it’s always nice to come home, and the same is true of web travels. To enable a home button on Safari, secondary-click the window’s title bar to reveal a contextual menu then select Customize Toolbar.

This reveals a window from which you may drag the home button to your desired location on the browser itself. Personally, I place the home button immediately to the left of the omnibar (search & address bar). 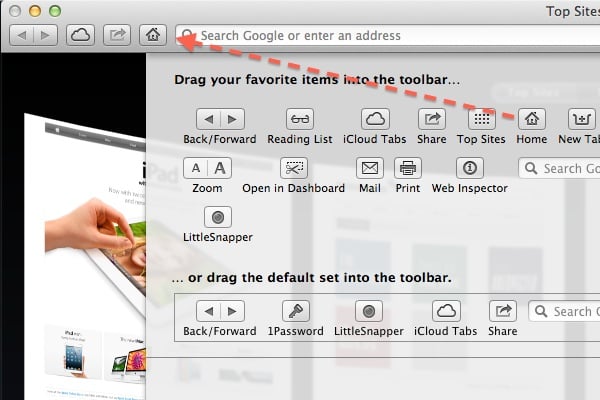 Adding a Home button to the Safari browser.

Many of us are still striving for that paperless office, but for those who depend on dead trees for their workflow, you can use the same method (as described in point seven) to place a printer button on your browser. If you like reading things on dead trees, here's how you add a printer button to Safari.

Finder is fundamental for navigating around OS X and, along with the removal of colored icons, Apple has changed the appearance and some of the functionality of Finder. If these changes have made Finder a little unfamiliar, there are things you can do.

A familiar friend on the desktop, Macintosh HD and a hard drive icon resided in the top righthand corner of the desktop for years before disappearing in OS X 10.7. To restore your friend, select Finder > Preferences > General and tick the tickbox to show hard disks on your desktop. 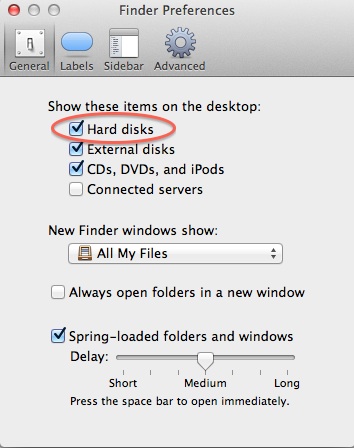 What happened to the Macintosh HD icon on the desktop? Get it back.

On opening a new Finder window, you will be taken to “All My Files” which shows a huge amount of stuff. Perhaps it makes more sense to go straight to your home folder from where you can find your Documents, Movies, Pictures, Music etc.? No problem, select that option in Finder > Preferences > General. 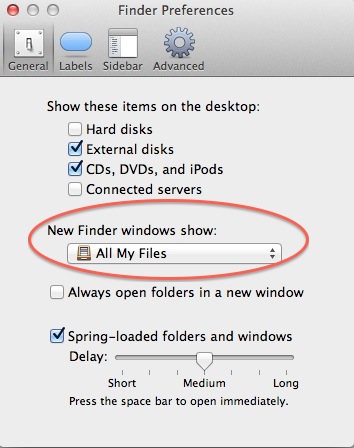 Changing the default Finder folder to something more useful.

11. Remove All My Files from Finder Sidebar

Do you find “All My Files” useful? Perhaps useful to find stuff you’ve recently been working on but just a mess the rest of the time? If you think it’s just cluttering and confusing you can get rid of it. Not rid of the content, just the view in Finder.

Go to: Finder > Preferences > Sidebar and remove the tick from the tickbox at the top. 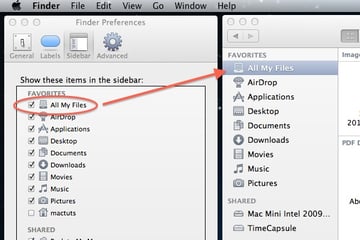 If you're not finding All My Files useful, ...get rid of it.

Tip: You can stop Finder displaying other items, such as Pictures, Movies and/or Music, by deselecting the appropriate items in Finder > Preferences > Sidebar.

Your home folder is where you should be storing all of your stuff. It’s where different applications tend to save documents and projects by default, so make it easy to go home.

Go to: Finder > Preferences > Sidebar and remove the tick from the tickbox at the bottom of the first section to show your home folder in the Finder sidebar.

How to get your Home folder to appear in the Finder side bar.

Tip: Items in the Finder sidebar can be reordered simply by dragging them into new positions above or below other items.

In the same way the status bar in Safari can reveal useful information, the same is true for Finder. Once there in Snow Leopard, it disappeared in the Lions.

To reenable it, simply hold down the Command and / keys together while viewing a Finder window. These keys toggle the status bar on or off. Alternatively, go to Finder and select the View menu in the menu bar to select the appropriate option. 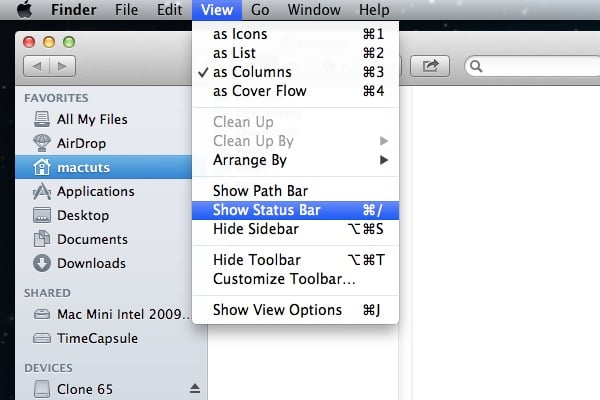 For long-time users of iTunes, the apparent removal of the sidebar in iTunes 11 comes as a major change. On the one hand it declutters the interfance, on the other it makes some stuff less easy to find. 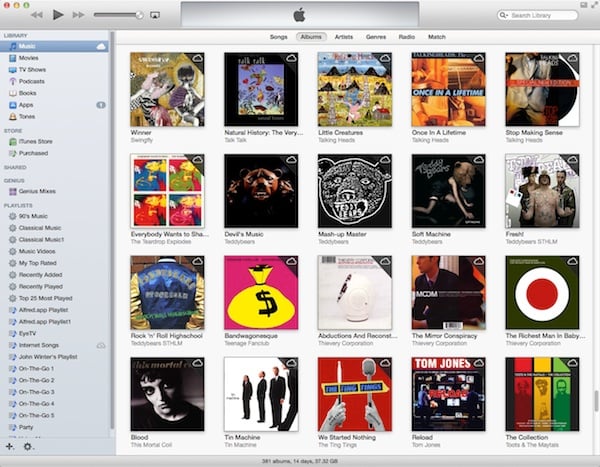 You might notice a pattern emerging here in what Apple has removed from display, by default, and how it can be reenabled.

Similarly with Safari and Finder, the iTunes status bar has disappeared. To reenable it, simply hold down the Command and / keys together while viewing an iTunes window. These keys toggle the status bar on or off. Alternatively, go to iTunes and select the View menu in the menu bar to select the appropriate option. 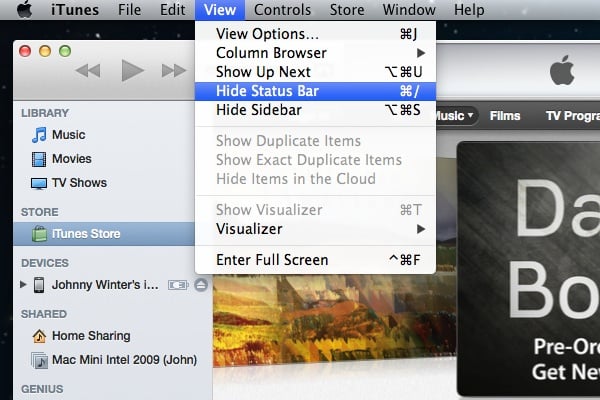 The iTunes status bar can provide useful information. Here's how to reactivate it.

While there are reasons for Apple’s changing the UI of recent versions of OS X, it’s up to you to decide whether these changes are an improvement or a detriment to your workflow.

This articles covers fifteen things that you might want to change when you upgrade to Lion or Mountain Lion. Which are your favourites? What other tweaks do you think are useful?

Johnny Winter
Editor and author
A regular contributor to Envato Tuts+, Johnny has been online since 1995 aiming to use the internet for the creation and sharing of knowledge for the greater good. Via setting up mailing-lists, forums and e-commerce businesses, Johnny has been an accidental podcaster and is now Editor of the Computer Skills, 3D & Motion Graphics and Music & Audio sections of Envato Tuts+
Weekly email summary