A Beginner’s Guide to the Ports on Your Mac

Thunderbolt, HDMI, USB 3.0, FireWire 800, Gigabit Ethernet, Digital Audio. What do they all do? If you’re new to the Mac, or computers in general, here’s a comprehensive guide explaining what all the ports do on your new Mac.

For the purposes of this guide, we’ll be basing it upon the current Mac lineup as of February 2013.

Compared to Macs before 1998, our Macs have the smallest range of ports imaginable. Before the iMac was introduced back in 1998, a Mac would have a wide range of different ports. There’d be ports such as ADB, SCSI, Serial and VGA. Each port was a different shape and did a different task. For example, ADB was used for keyboards and mice, SCSI was used for storage and printers and Serial would allow the connection of different devices such as modems and other printers.

Back on the original beige PowerMac G3, there was no shortage of different ports

On a PC you’d find ports such as PS/2, AT, Parallel and Game port. That’s a lot of different ports that only do one or two specific jobs!

One Port to Rule Them All… Almost

With the invention of USB, Apple made a monumental push forward when it released the iMac. Gone were these differing ports (along with the floppy drive) and in their place was a single port type - Universal Serial Bus. USB was designed to be used for a wide range of devices, from input devices such as a keyboard to printers and CD drives.

When Apple launched the original iMac, proprietary ports were replaced with USB

As the years went by, USB has done an incredible job of taking the place of many different connectors and will continue to do so. Thanks to USB, our keyboards, mice, printers, cameras, scanners, joysticks and storage devices all work over a common interface. However, USB simply can’t do every job we ask of it. For example, it’s not designed to be used as a video interface nor is it the quickest when it comes to external storage. Because of these limitations, connections such as FireWire and Thunderbolt have appeared to fill the (small) gaps left by USB.

USB 3.0 is the latest iteration of the Universal Serial Bus format. USB 3.0 is a huge improvement over USB 2.0 as it’s much, much faster. USB 2.0 can top out at a theoretical 480Mbits/sec. USB 3.0 theoretically tops out at 5Gbits/sec - around 10 times quicker. It first appeared on Macs in 2012 when Apple introduced the new Retina MacBook Pro and updated MacBook Air range. Currently, it’s only missing from the Mac Pro.

It can also provide more power to devices. Some USB 2.0 drives come with a second USB cable that simply has an power connector on the other end if your Mac can’t provide enough power to the drive. With USB 3.0, that’s no longer the case.

USB 3.0 is still just as versatile and fully backwards-compatible with older USB devices. Not only can you use a USB 2.0 device with a USB 3.0 Mac but a USB 3.0 hard drive will even work with a USB 2.0 Mac. Your printer or keyboard will work in exactly the same way. USB 3.0 cables are noticeably different and you can generally tell if a device is USB 3.0 simply by the blue USB connector it will have.

USB 3.0 still works with any existing USB devices such as the Apple USB Keyboard

Because USB 3.0 is so much faster than USB 2.0 and extremely simple for manufacturers to work with, USB 3.0 drives have entered the market at the same prices as their USB 2.0 equivalent. Because of this, if you’re ever looking for an external hard drive - go for USB 3.0, even if your Mac isn’t USB 3.0. That way, when it’s time to replace your Mac, you’ll already have a drive that will work wonderfully with it.

Before USB 3.0, if you wanted to use an external storage device professionally, you’d be looking at FireWire 800 and eSATA. Many FireWire 800 drives command(ed) a premium over their cheaper USB offerings. But because USB 3.0 is so much quicker and drives are so inexpensive, for most users and professionals it’s the best choice.

Thunderbolt was introduced back in 2011 on the MacBook Pro and is a joint creation between Apple and Intel. It’s designed as a completely new form of IO that’s specifically more powerful and versatile than USB. It combines both a high-seed expansion bus (known as PCI Express - PCIe for short) and DisplayPort over the same connection. This means that Thunderbolt isn’t just for another port - it’s an extension of your Mac. So not only can you use devices such as hard drives, you can connect displays to it as well. 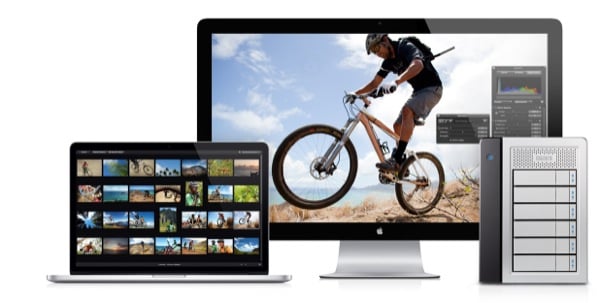 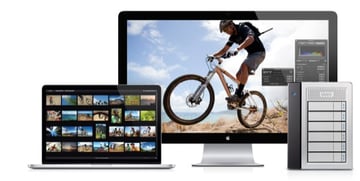 Because Thunderbolt is designed to be an extension of the Mac’s own expansion, it can be used as any number of different ports via an adapter. If we take a look at this Belkin Thunderbolt Express Dock, we can see it provides not only more Thunderbolt ports, but we also get USB 3.0, Gigabit Ethernet, FireWire 800 and even audio. This is all due to the fact that Thunderbolt can extend what your Mac is already capable of. Need more USB ports? More FireWire? Another Ethernet port? There’s an adapter for that.

The current range of Thunderbolt-equipped MacBook Pro/Airs can drive two Thunderbolt displays simultaneously along with its own display as Thunderbolt supports daisy-chaining. Additionally, Thunderbolt can support up to 10Gbits/sec so it’s definitely faster than USB 3.0 for raw data.

Unfortunately the ecosystem is pretty sparse; at the time of writing Apple is the only manufacturer of a Thunderbolt display. Thankfully, manufacturers such as LaCie and Promise are starting to release more and more peripherals.

Tip: Keep up to date with what devices are available for Thunderbolt with this List of Thunderbolt-Compatible Devices over at Wikipedia.

FireWire 800 is available on the non-Retina MacBook Pro, Mac mini and Mac Pro. It was originally developed by Apple and released in 1999,as FireWire 400, when the very first PowerMac G3 was launched. Since then, it’s been updated to FireWire 800. It’s a very popular format for professionals as it supports daisy-chaining and its high speed of 800Mbits/sec meant it was great to use with large storage devices and video capture.

LaCie are a popular manufacturer of FireWire 800 storage devices

If USB 2.0 was 480Mbits/sec and FireWire 800 was 800Mbits/sec, then surely that would make FireWire 800 just under twice as fast? Actually, FireWire is a lot faster than USB 2.0. USB’s transfer rate is know as a burst rate. It sends a lot of data at its highest speed before stalling and then repeating it again. FireWire 800 is a constant rate - it constantly sends data at 800Mbit/sec. Imagine if someone was driving 50MPH for a few seconds then stopping, then 50MPH and stopping again. Compared to someone who is doing a constant 30MPH, they’ll be much slower reaching the finish line.

USB 3.0 however completely obliterates FireWire 800 and, as such, the latter’s now fast becoming a legacy connection. There’s a huge ecosystem of FireWire 800 devices so support for them is still very much required. Apple has dropped FireWire 800 from most of its portable Macs to save space but with Thunderbolt you can simply pick up an adapter and carry on using any FireWire 800 devices you have.

Available on any of the desktop Macs or original non-Retina MacBook Pro is Gigabit Ethernet. For the rest of the Mac lineup, there’s a handy Thunderbolt to Ethernet adapter. It’s recommended to use Ethernet if you’re often transferring large amounts of data over a network, provided you’re sat near a suitable socket. Wi-Fi has made leaps and bounds in speed, but it still tops out at around 300Mbits/sec - and that’s rarely reached due to limiting factors such as interference. Gigabit Ethernet on the other hand tops out at a constant 1Gbits/sec.

You’ve no doubt come across HDMI if you have a HD television at home. It’s pretty much the standard for home entertainment devices such as DVRs, games consoles and set top boxes. Just one cable can provide high quality audio and HD video from your device to your HDTV.

The current Retina MacBook Pros and Mac mini have a dedicated HDMI port which you can connect a standard HDMI cable to, displaying your Mac on your HDTV. In addition to video, the HDMI port on a Mac will also transmit audio which makes using something like a Mac mini as a media centre extremely tempting.

Should you have a Thunderbolt-equipped Mac then you’re not left out. There’s Thunderbolt to HDMI adapters that also pass audio using a single cable too.

Tip:Increasingly computer displays are equipped with HDMI so it makes connecting your Mac to it very easy.

Some Macs have a single audio port

Most of the Mac range have just one headphone socket… or do they? In fact, the audio socket of your Mac is extremely clever. It’s actually a headphone and microphone socket.

If you’ve got a suitable microphone, you can simply plug it in and your Mac will automatically switch the audio port to an audio-in port, allowing you to use the microphone. 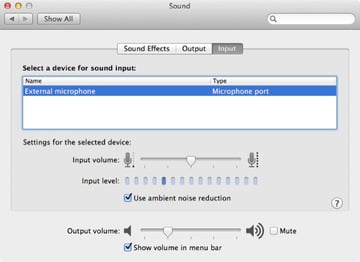 You can manage your microphone’s settings through System Preferences

Headphones with Remote and Mic 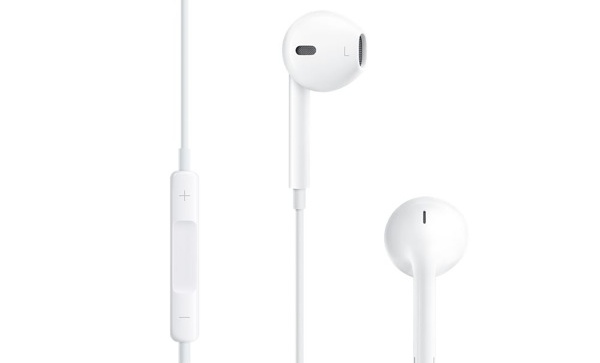 Your Mac’s audio port is compatible with the Apple earphones with remote and mic, just like an iOS device

If you’ve got an iPhone and have a set of headphones or earphones with a remote and mic, you can plug them in and use both the earphones and mic at the same time. This makes FaceTime or Skype calls much clearer. What’s more, the volume buttons and play/pause button have the same actions on your Mac as they do on your iPhone!

In addition to being a traditional audio port, your Mac can output digital audio. This requires the use of a TOS-Link cable. If you have a stereo amp that can accept a digital input then you can play high quality audio using this cable. It’s even capable of outputting surround sound if you use your Mac to play a DVD or have a suitable video file that supports surround sound (however, your Mac can output this via HDMI so it’s now slightly redundant). 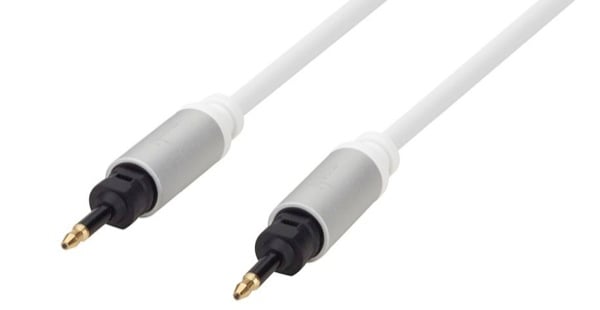 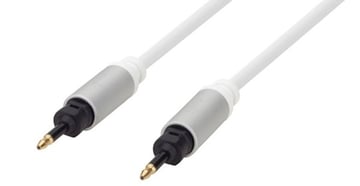 Ports aren’t as specialised as they used to be and can be used for many different tasks. USB 3.0 hard drives are insanely quick (not to mention cheap) and Thunderbolt allows an almost limitless expansion of your Mac - we really are spoilt for choice. And thanks to Thunderbolt, our Macs are so expandable (with or without additional adapters) that we can connect pretty much anything that we want.

If you use Thunderbolt, let us know how you use it in the comments.