AirPlay on the Mac: The Definitive Guide

AirPlay is the technology used to stream media content from various Apple devices to other devices in your house, like your television or stereo system. AirPlay in general, and specifically for the Mac, has gotten a lot of extra attention lately, so this tutorial will show you the ins and outs of playing your media precisely where you want to, using AirPlay.

Step 1: Set Up Your Destination Device

The first thing we need to address doesn't even have anything to do with your Mac. You'll need to determine what device you want to catch your Mac's AirPlay signal, and set it up to do so. The choice of which product to use is entirely a personal preference. A number of electronics manufacturers are licensed to sell AirPlay enabled devices, which means a speaker dock from iHome and a full-featured stereo amplifier from Denon will both be capable.

For the purposes of this tutorial, I'll mention that a few Apple devices will support AirPlay, including the Airport Express and the Apple TV, and that today we'll be working with the Apple TV connected to my television with a simple HDMI cable. (My television handles my audio, but you could just as easily use the optical audio jack on the Apple TV to send sound to a separate set of speakers.)

The Airport Express is equipped with a headphone jack, making it only capable of AirPlaying audio. The Apple TV is currently the only way to AirPlay video content.

No matter which device you use, it will need to be connected to your home network. Here is how to set up your Apple TV to accept AirPlay streams:

Connect to your home network

With your Apple TV powered on, navigate to the Settings section on the home screen. 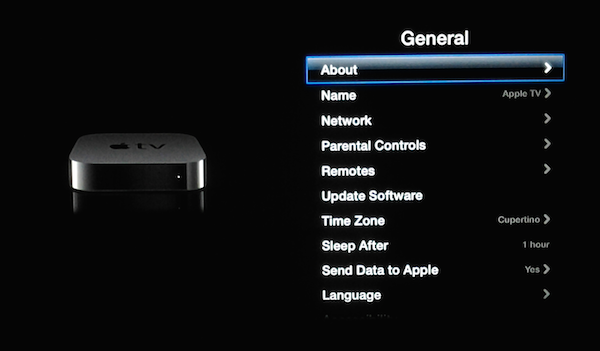 Select your network from the list and enter the security key (if applicable). Now your Apple TV will be connected to the Internet, and you'll be able to watch Netflix, rent movies from iTunes, and most importantly, utilize AirPlay. 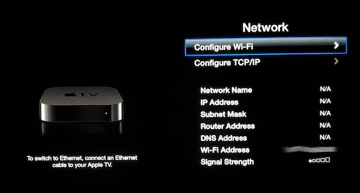 Return to the top level Settings menu, and navigate down to AirPlay. To activate it is simply a matter of turning it on, but from this menu, you also have the option to password protect AirPlay, which prevents from anyone with an iOS device on your network from taking over your TV. 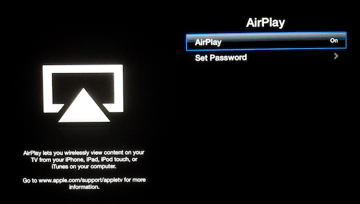 Now that your AirPlay device is ready, we can move over to the Mac. Your Mac can use AirPlay to send content to your television using a number of different methods (with some restrictions, but more on that later). Let's take a look at them.

The source that is likely to be used most often (as it is applicable to the widest range of Mac users) is iTunes. Since iTunes probably already houses your media anyway, AirPlaying is a very seamless process.

Launch iTunes and you'll notice a new button on the bottom right toolbar (this button will appear anytime your Mac is sharing a network with an AirPlay-ready device). 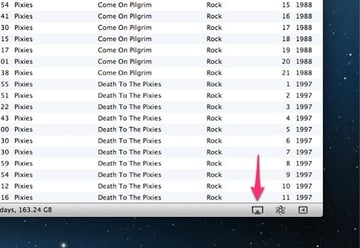 When the color is greyed, like in the screenshot above, AirPlay is in its "off" state, playing content out of your computer speakers or headphones. However, if you click the button, you'll be shown a list of AirPlay devices available. In this case, I will choose to send my music to "Apple TV". Almost instantly, The Pixies are coming out of my stereo, with just 2 clicks. Any devices on your network will show up in this list, which means that if you have an Apple TV in the basement and in the den, with an AirPort express in the bedroom, you can send audio to any of those rooms so it will be playing when you get there.

However, at the bottom of the source selection list in iTunes is the option "Multiple Speakers…". Selecting this option will bring up a secondary window. In this window, you can select and deselect AirPlay devices and independently set the volume of them, allowing you to hear music in multiple rooms simultaneously. 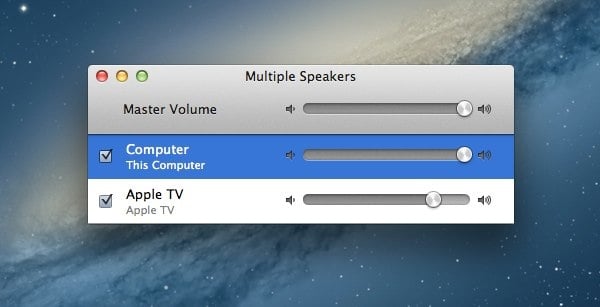 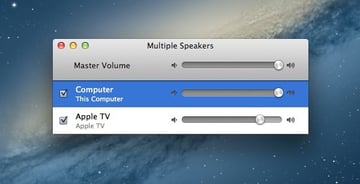 The AirPlay button will be found in the same place when playing video, as well as on the transport controls overlay in full-screened video.

The other way to send audio/visual content from your Mac to your Apple TV is through AirPlay Mirroring--a feature introduced in OS X Mountain Lion. This is where things get a little restrictive. AirPlay Mirroring allows you to stream your desktop to your television in real time, but relies on Intel's QuickSync hardware-accelerated video compression technology.

What this essentially means is that if your Mac is older than about mid-2011, you unfortunately won't be able to utilize the feature. Apple has a more specific list of supported devices.

...if your Mac is older than about mid-2011, you unfortunately won't be able to utilize [AirPlay Mirroring].

Assuming yours is a supported Mac model, sharing a network with an AirPlay-capable device will cause the AirPlay icon to appear in the menubar, just as it appeared in iTunes. 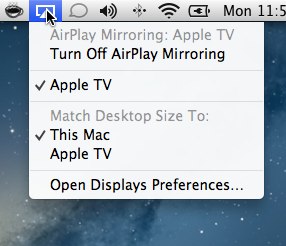 By selecting "Apple TV" from the list, both the contents of my screen and the output of my speakers will be sent to my television and speakers. AirPlay Mirroring has the potential to be incredibly useful; things like slideshow presentations and other projected work, sharing websites, photos, games, or any other content with friends, and utilizing a larger screen space for being productive become utterly effortless.

There are a few options available for customizing the way AirPlay Mirroring behaves. You can find them in the Displays section of the System Preferences app (or by clicking "Open Displays Preferences…" from the menubar icon). 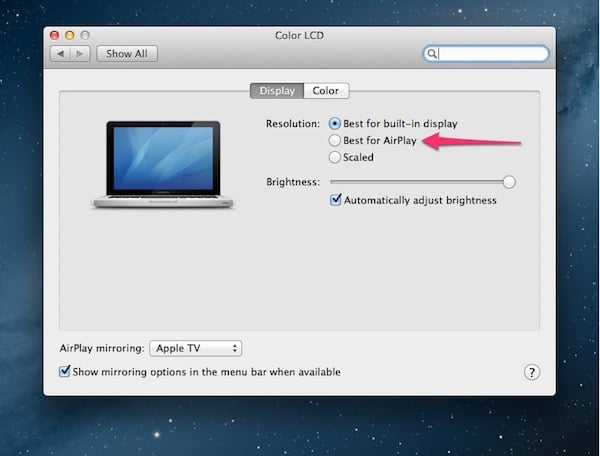 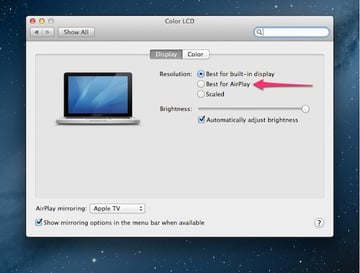 With AirPlay mirroring active, you'll have a resolution option that won't show up otherwise, which is designed to optimize the resolution of your Mac's display to the screen you're trying to AirPlay it to. In most cases, this will be the preferred option, and it will letterbox your computer display to match the aspect ratio. However, in some cases you may want to preserve your desktop dimensions, which would then cause the image on your television screen to become letterboxed, in much the same way it would if you were AirPlay Mirroring an iPad.

In most cases, you'll want to select the resolution that is optimized for the Apple TV.

There may be scenarios in which you want to send your Mac's system audio to your stereo speakers, but don't need to stream the video. For example, you may want to listen to a streaming Internet radio station, or a service like Pandora, which doesn't directly support AirPlay. You can select your AirPlay device as the audio output device for your computer using the Sound preference pane (or by option+clicking the Sound menubar icon and selecting "Apple TV" as the output device). 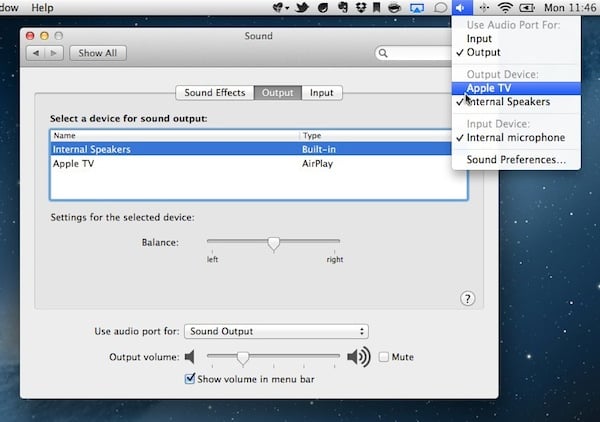 Unfortunately, while AirPlaying from iTunes will isolate your media audio, sending your system audio to your Apple TV will leave system sounds like notifications audible. This can potentially interfere with whatever media you're trying to experience.

A Note About Home Sharing

While Home Sharing isn't technically the same thing as AirPlay, it does involve streaming content to your television via Apple TV, so I thought it was worth mentioning.

Home Sharing is a way to have access to content you own on the various devices connected to your home network. It's actually quite like a reverse-AirPlay, in that you're retrieving media located elsewhere, rather than sending media from the device you're using.

First, activate Home Sharing on your Apple TV with your Apple ID and password. 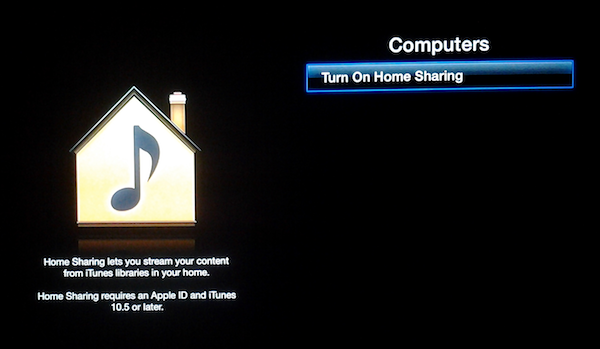 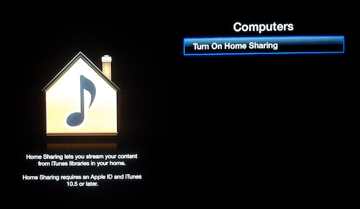 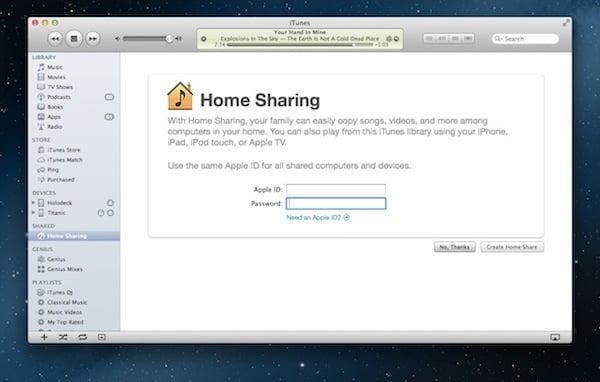 Home Sharing can be helpful if you have multiple Macs in the house with a central media library stored on one device (or an external hard drive, for example). Its inclusion on Apple TV simply means that you can play your music or video without ever touching your Mac.

Well, there you have it. AirPlay is a technology that continues to grow and expand, allowing Apple to create the ability for users to have a seamless home entertainment experience, and hopefully you are armed with a little more knowledge about using it.

If you're already using AirPlay on your Mac, leave a comment and let us know how you've implemented it in your home!