Apple has been in the router market for years now. The corporation currently offers three WiFi base stations for your home or office. I’ve used Apple’s prime router for a good eight months now and it’s been good to me. Not only was the initial setup easy, but maintaining the device has been painless and I’ve only had a few minor issues with it over the months. In this article, I’m going to tell you everything you need to know for basic AirPort base station operation. There’s even a bit of history involved, so come join me after the break.

The Base Station Selection — A Brief History

Before I get into the software configurations of AirPort routers, I’m going to go over the hardware that’s available to you, the consumer.

Apple originally introduced the AirPort Express on June 7th, 2004. It included analog and digital audio outputs, two Ethernet ports, and a USB port for charging iPods or sharing printers wirelessly. The router took advantage of AirTunes, AirPlay’s predecessor that only allowed audio streaming, and played music anywhere you wanted in the house. Apple released this new compact router that had a similar style to the MacBook charger in July of 2004 for $129.

It's a bit Extreme.

Things have changed a lot since the original AirPort Express, especially recently. In June of this year, Apple quietly refreshed its AirPort Express base station to better resemble its superior, the AirPort Extreme. This new router is similar in size to the Apple TV and adds simultaneous dual-band 802.11n WiFi to the device’s capabilities making it an even more desired alternative to third-party routers since the price was now only $99. It’s now pretty much a small home alternative to the AirPort Extreme.

After the success of its smaller AirPort Express, Apple thought it was time to bring in a more powerful router for small businesses and larger homes. At Macworld in January of 2007, the Cupertino-based corporation did just that. AirPort Extreme was born with 802.11n and 2.4 GHz or 5 GHz technology, giving it a bit of an edge on the third-party competition. The device included three 10/100 Ethernet LAN ports, one 10/100 Ethernet WAN port, a USB port for printer sharing, and a built-in NAT firewall for your protection.

Sadly, it looks nothing like those legendary time capsules that were buried under the ground for years.

Closely resembling the aforementioned AirPort Extreme, Apple’s Time Capsule hopes to be your new way of backing up everything wirelessly — it’s an AirPort Time Machine with a built-in 2 TB or 3 TB hard drive. Time Capsule has been around since January 15th of 2008 when the corporation announced it at Macworld. Other than that, the only difference between the AirPort Extreme and this remote backup device is that it costs $299 for a 2 TB model and $499 for a 3 TB one. It’s a pricey alternative to purchasing a economical multi-terabyte backup drive of the Western Digital variety as I did on Black Friday last year.

First Things: Setting Up Your AirPort 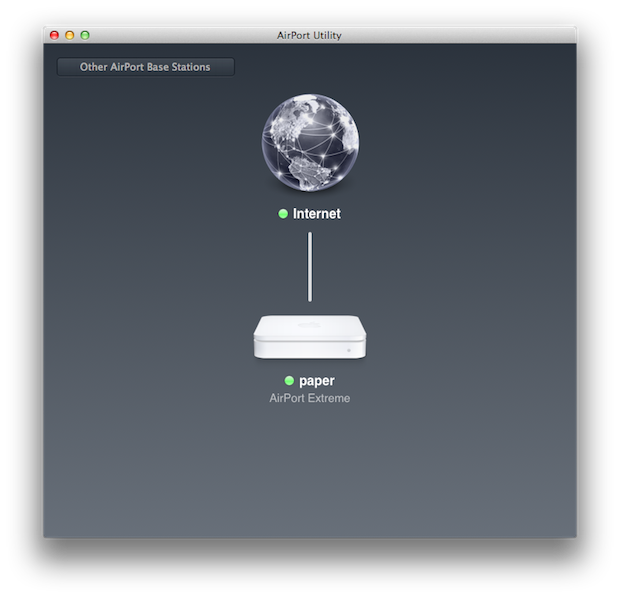 This is the main screen of AirPort Utility, which you will be seeing often.

When you first get an AirPort base station, whether it’s Express or Extreme, you’ll have to go through a quick setup process to get things up and running. After you’re finished unboxing the pretty polycarbonate white box, follow the steps below to configure everything.

One of the most important parts of networking.

If you live in the middle of nowhere — I mean literally, not theoretically — then you likely have no router-poachers to worry about. Otherwise, you’re going to need to add some security to your network and I’m going to help you with it, since Apple neglected to do so during the basic setup.

"What Do Those Colorful Lights Mean?"

You might see some blinking and red lights of what you assume to be death, but what do they really mean? 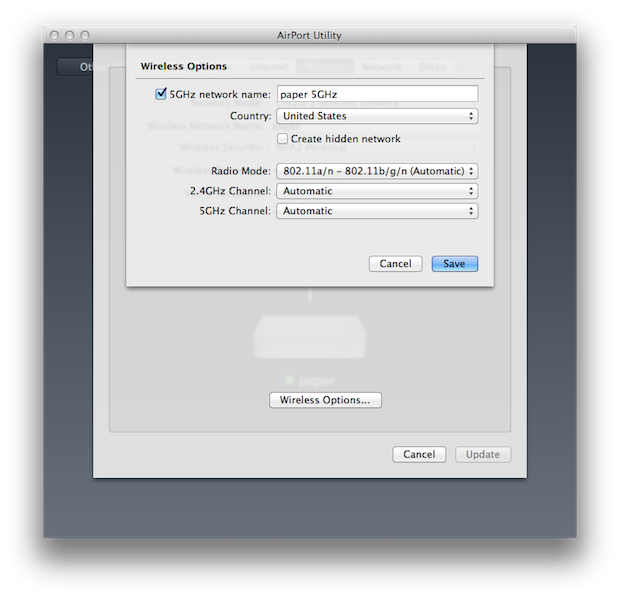 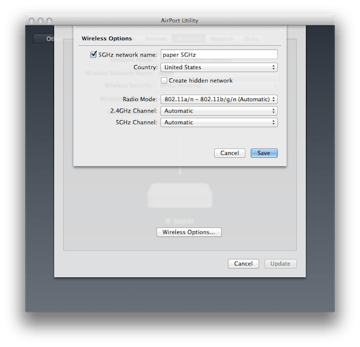 Interference is not an option.

In very congested parts of a city, getting the signal from your wireless network might be hard because there’s so much interference. And that’s not the only problem; the network can oftentimes cut out, rendering that Skype call you made very unproductive. This isn’t a problem where I live, but I do understand the issue of disruption since my home phones have wireless handsets on 2.4 GHz.

If you set up the 5 GHz band, your base station will have better odds of correctly communicating with devices since it’s a less-used frequency. Also, 5 GHz has 23 non-overlapping channels, while 2.4 GHz has only three. For the time being (since there are fewer routers on the band), 5 GHz remains a clearer, better transmission frequency if you wish to transmit the closest to flawless you can. So if you’re a meticulous kind of person, this might do you well. I’ll show you how to quickly set up the 5 GHz band on an AirPort Extreme.

Tip: You probably noticed that there’s a “Create hidden network” option in the Wireless Options pane. If you wish to make your network movements concealed, be sure to enable this, but be warned that you’ll need to remember the network name to manually join it since it won’t show up when scanning.

Why not turn your base station into a home server?

Warning: Please be aware that you must have an AirPort Extreme to use this function.

One of the coolest hidden features that AirPort Extreme devices have is the ability to share hard drives over the network wirelessly or via Ethernet. It’s as simple as plugging in the device you want to share network-wide and then opening Finder on your Mac, clicking the base station in the sidebar, and double clicking the drive. (If you’re not seeing anything in the sidebar, go to Finder’s Preferences [CMD + ,], click the Sidebar tab, and check the box beside “Connected servers”.) From there you can access the files at a surprisingly quick speed even using WiFi. Now all we need is USB 3.0 support and Little Deer will run swift and sure through forest.

Tip: You can even share a USB flash drive using your AirPort Extreme. Just plug it in like you would any hard drive.

Ah, but there’s more to the disk sharing than just accessing it. You can secure the shared disks with a password if you’d like and that’ll ensure that you don’t get any unnecessary intruders in your personal files. If you want to set a password for your disks, go to AirPort Utilities’ Edit screen and click the Disks menu. You select either to use the base station’s password (misleadingly named “with device password”), a password that you set for the disk, or using accounts that you can configure — you’ll be inserting a username, password, and the usual information for this method. Remember to click Update when you’re done to apply the settings. 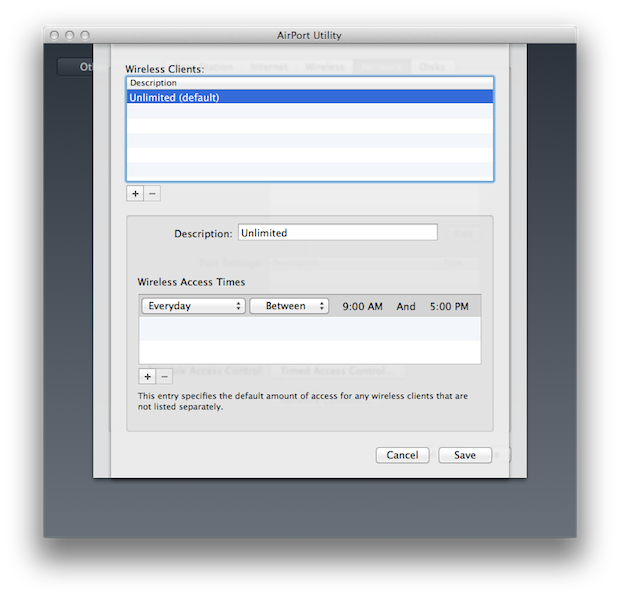 Tip:This only works on the wireless network and won’t affect Ethernet connections.

If you head over to the Network tab of AirPort Utility’s Edit window, you’ll see that there is an Access Control setting available. This will limit the usage of certain devices to whatever you choose. Instead of using parental controls on your Mac, why not have this as an alternative? Once you insert the MAC address of a device using the + and put in some times you’d like that device to access the network, it’ll be restricted to exactly those junctures. It’ll also work for iOS devices or anything else that accesses the wireless network.

Learn Even More About AirPort

Read up.
Image by AlphaONE666.

Surprisingly, there’s even more to know about Apple’s wireless technology. I’ve gathered a few notable documents and articles that you should read on AirPort and networking in general if you wish to further your knowledge of the subject. Below’s a short list of them.

I hope you enjoyed this article and that it taught you quite a bit about your local network. If you have some of your own suggestions or tips for AirPort networking, let us know in the comments.