In this tutorial, we'll take a brief look at how to get the old RSS screen saver back into OS X Mountain Lion. Then we'll learn about three different Twitter RSS feeds that you can grab and customize to make your own Twitter screen saver.

Learn how to display a Twitter timeline in a screensaver

The folks at Apple created a really cool screen saver that allows you to paste in any RSS feed and have it displayed in a fancy vortex animation. Combine this with an RSS feed from Twitter and you've got yourself a nice screen saver full of tweets.

The problem with this method is that it's a bit outdated. It worked great a few years ago, but not anymore. Apple decided to ditch the RSS screen saver in Mountain Lion. Go ahead, take a look, it's not there. In its place we have a ton of great new slideshow screen savers, but fans of the RSS version will be sad to see it missing. 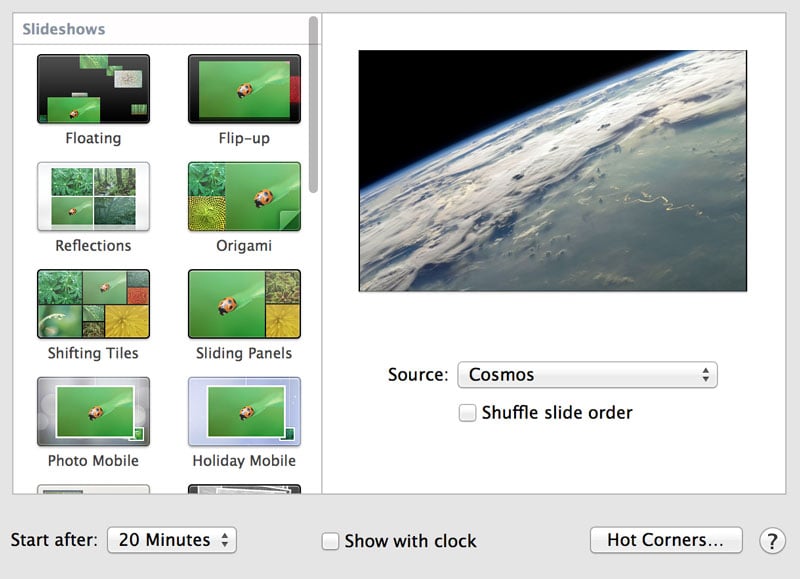 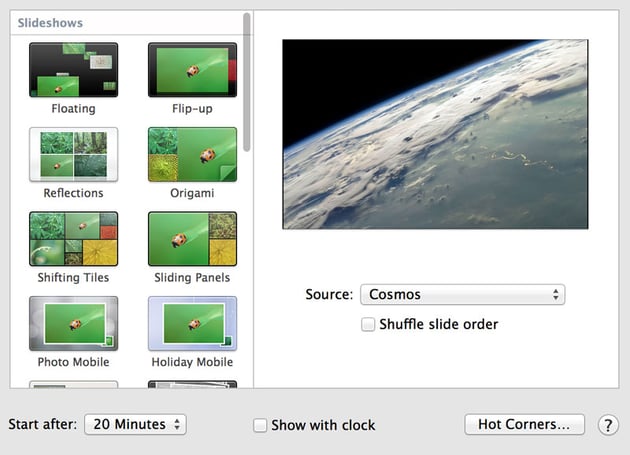 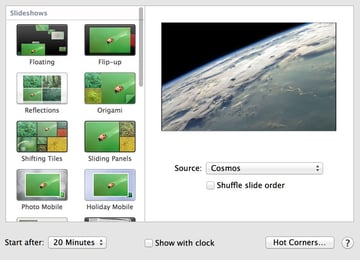 Lots of great screen savers, but no RSS option.

On top of this, Twitter no longer makes it obvious how to access a given user's timeline as an RSS feed. Just like Apple, Twitter has slowly been phasing out RSS integration. What's a nerd to do?

Fear not, these are actually fairly minor hurdles. With a little trickery, we can get back what was lost and have this screen saver up and running on Mountain Lion.

Getting The RSS Screen Saver Back

As it turns out, the RSS screen saver is perfectly compatible with Mountain Lion, it has simply been removed. Apple also recently scrapped RSS support from Safari. Clearly, they're looking to social media as a replacement, evidenced by the ever-increasing built-in social network support.

So the question is, where can you score a copy of the old screen saver? One quick solution is to look on any older Macs that you have lying around.

The path to your Mac's built-in screen savers

As you can see in the screenshot above, the path to OS X's built-in screen savers is Macintosh HD > System > Library > Screen Savers. The file that you're looking for in this folder is titled, "RSS Visualizer.qtz".

Alternatively, a MacRumors forum user has uploaded a copy of the file that you can download (no guarantees as to how long that link will work).

Once you have a copy of the screen saver on your computer running Mountain Lion, it's time to install it. Generally, you don't want to mess with your root System folder, so you'll need to put it into your user's Library folder instead.

Alas though, Apple provides us with yet another hurdle to overcome. In Mountain Lion, your Library folder is missing! Well, it's not really missing so much as hidden from those who don't know enough secrets to get it back.

There's a Terminal command for making your Library folder appear, but that's a little bit of a pain and I've found that it simply doesn't stick in the long term and you end up having to re-run it periodically. Instead of going that route, I prefer to use the shortcut in the Go menu in Finder.

The Go Menu in Finder

As you can see, by default, there's no Library option in this menu. However, watch what happens when we view the same menu, this time with the Option key held down.

To access your Library folder, hold down Option when viewing the Go menu.

Clicking on this menu item should bring up your long lost Library folder. Now navigate to the Screen Savers directory and toss in "RSS Visualizer.qtz". When you load up the screen saver options in System Preferences, you should now see the old RSS screen saver right where it used to be.

Tip: Try adding your Library folder to your Finder sidebar so you never have to jump through any hoops to access it again.

Launch System Preferences on your machine and click on Desktop & Screen Saver. Now make sure that the Screen Saver tab is active and scroll to the very bottom of the list of screen savers on the left. 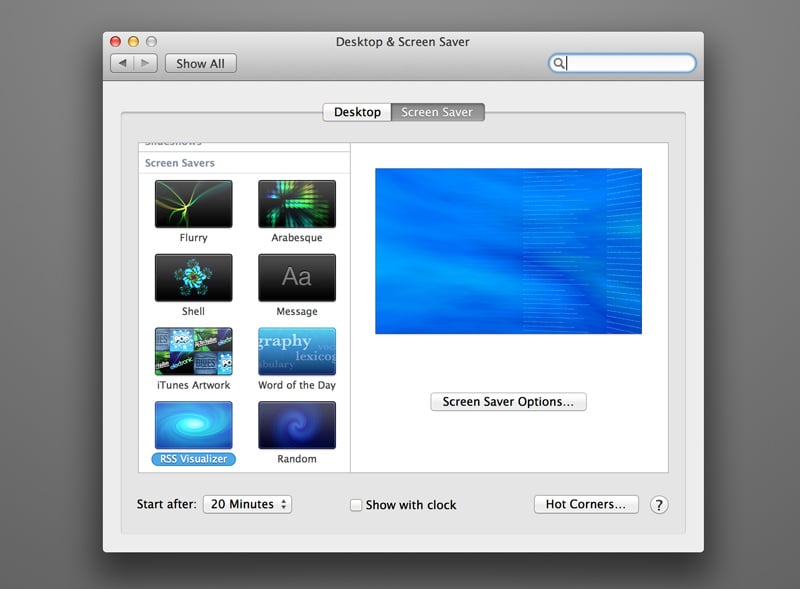 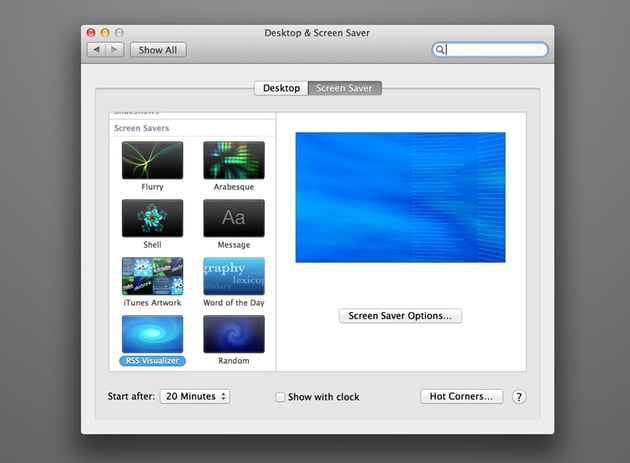 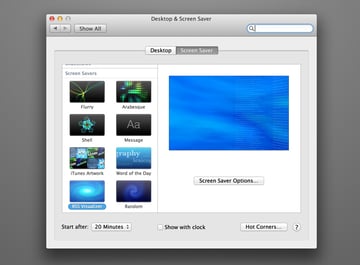 Select the RSS Visualizer screen saver and you'll see a little preview pop up on the right side of the window. Click the Screen Saver Options button to set up a custom feed. 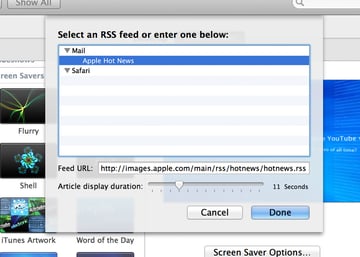 By default, there's probably going to be an Apple feed in the Feed URL field at the bottom. Simply replace this with any feed that you want and you'll have yourself a customized screen saver. Also feel free to tweak the Article Display Duration.

Now that we have our screen saver all set up, all that's left is to drop in an RSS feed. As I mentioned before, Twitter doesn't make this information very easy to find these days so I really had to dig around to find it, but eventually I uncovered three different feeds that you can try out.

The first was the most difficult to find but perhaps the most useful: the following timeline. This allows you to insert any user name and receive all of tweets from the people that the user is following. If you insert your own user name, this is essentially the main feed that you see when you log into Twitter.

The next two feeds are useful as well. The first displays all of the recent tweets from a single user and the second displays a given user's favorited tweets. Here are all three for your copy and pasting convenience: 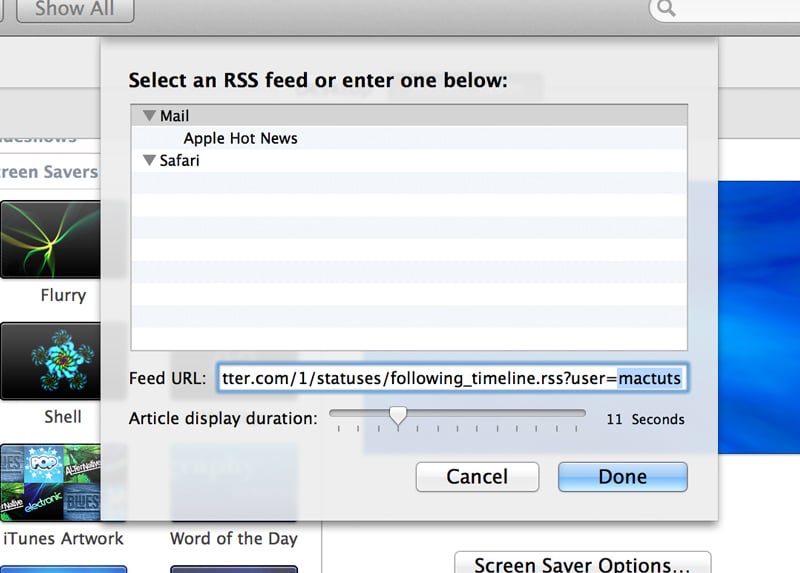 Replace the user name with your own.

The feeds in the list above are all set for our own Twitter account, @mactuts. To customize them for any other user, simply replace the user name at the very end of each URL.

Tip: Again, Twitter seems to be gradually phasing out RSS functionality so there's no guarantee that these feeds will remain functional in the long term. Enjoy them while they last!

That's all there is to it, you should now have an awesome Twitter screen saver. I always really liked the RSS Visualizer so I'm glad that it's easy enough to get it back in OS X Mountain Lion.

Are there any other awesome OS X screen savers that you've come across? Leave a comment below and tell us about your setup.

Josh Johnson
Equal parts editor, writer, designer, & photographer. I work for Envato and have written tons of stuff for Design Shack.
secondfret/
Looking for something to help kick start your next project?
Envato Market has a range of items for sale to help get you started.