Dictation: Let Your Mac Do the Typing

Dictation is one of the coolest new features unveiled with the recent Mountain Lion release, but with so many other exciting changes, you may have forgotten to take your new speech recognition friend out for a spin. In this tutorial, we'll walk through the setup of Dictation, where it excels, and where it falls flat.

Step 1: Getting on the Internet

The first step to setting up Dictation in Mountain Lion has nothing to do with System Preferences or even really OS X. Before you even think of getting going with Dictation, make sure you’re connected to the Internet. That’s right, Dictation won’t work without an Internet Connection.

In the privacy declaration in the Dictation settings, Apple stresses that any information gathered for use with Dictation isn’t linked to any other Apple user data they’ve got for you.

Everything you dictate is sent to Apple before being converted to text. Apple is also going to be looking into other information on your Mac, too, such as your contacts. All of this information gathering is to help Apple better recognize what you’re saying. For instance, I’m entirely likely to say any number of words related to incredibly geeky old school console games, but I’m less likely to go searching for anything having to do with a “catalytic converter” or whatever a “hemi” is. 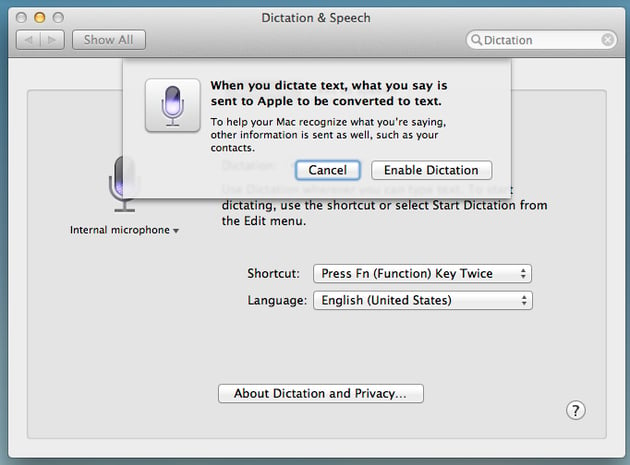 In the privacy declaration in the Dictation settings, Apple stresses that any information gathered for use with Dictation isn’t linked to any other Apple user data they’ve got for you. Dictation is a one off deal. You can also turn it off at any time. But first you have to turn it on.

Before you can start rattling off your latest fanfiction via Mountain Lion’s Dictation, you’ll need to make sure you have it turned on. Open System Preferences, and locate Dictation & Speech under System. That will take you to the Dictation preference pane. (You can also control Text to Speech here, the creepy guy who can read off your system time and such, but that’s for another tutorial.)

If Dictation isn’t already enabled, select the "On" radio button. You’ll have to acknowledge that everything you dictate is going to be sent to Apple, along with all the stuff Apple thinks you’re likely to say, as mentioned above in Step 1. If you’re cool with that, click "Enable Dication."

Dictation doesn’t "just work," no matter what the OS X advertisements boast. You have to create a keyboard shortcut that will turn Dictation on whenever you have something to say. And no, saying “Hello, Computer?” into your mouse isn’t going to cut it.

Luckily, you can create your own shortcut by selecting Customize in the Shortcut dropdown.

The default shortcut is a double tap of the Fn (Function) key, all the way in the lower left of your Mac’s keyboard. This has been just fine for me, but if it’s a no go for your third-party keyboard or just doesn’t work for you and the way you type, you can choose another shortcut. There are three alternate shortcuts built in and ready to go, all involving the Command key, but I can see compatibility issues there again for third-party keyboards. 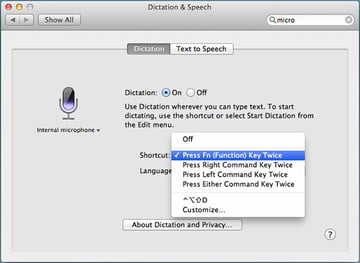 Selecting a keyboard shortcut for Dictation

Luckily, you can create your own shortcut by selecting Customize in the Shortcut dropdown. Unfortunately, you can’t set it to something awesome like a double tap of the Shift key or three Qs in a row. If you deviate from the defaults, you’re going to be looking at a more conventional Command+Option+Shift+D or something similar. Just make sure it’s not already something you’re using regularly or it will interfere with other shortcuts.

Step 4: Setting Up Your Language

Kidding aside, if your “English” deviates from the standard, native speaker though you may be, you might run into some trouble with Dictation.

Selecting the Language dropdown allows you to choose your own particular English, as long as that English is one of the three mentioned above. If not, well, hopefully you’re good at accents. Kidding aside, if your “English” deviates from these standard three, native speaker though you may be, you might run into some trouble with Dictation.

Choosing an input language for Dictation

French, German, and Japanese are also available languages for Dictation. If your native tongue is French, but you grew up speaking it somewhere other than on the continent, I imagine you’re going to have some hurdles to overcome with Dictation.

This may be a no-brainer, and most of us won’t even have to worry about our input device or microphone. Those who do have an extra microphone or two set up are probably already prepared to make these adjustments on their own.

That said, if you’re having trouble or Dictation doesn’t seem to hear you at all, you may need to check this setting out. If you don’t have anything extra hooked up to your machine, you’ll want to choose Automatic or Internal Microphone from the microphone dropdown. 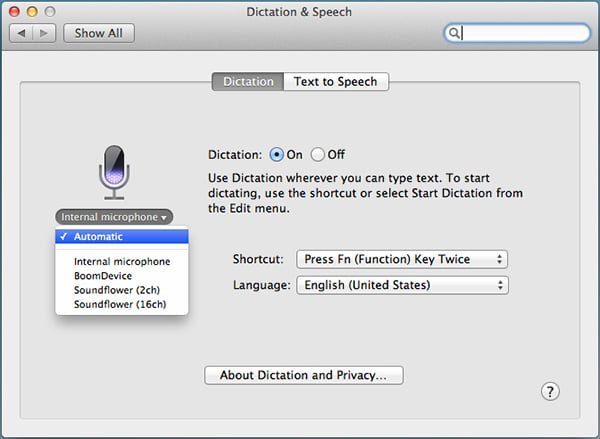 If you continue to have problems or can’t find your microphone, you can adjust these settings in the Sound preference pane in System Preferences.

Step 6: Say Something and Enunciate!

To get started dictating, you’ll need to move your cursor to just about anywhere that will accept text input. Search fields or text editors both work fine. Tap your shortcut to begin inputting via Dictation. Any noises or music coming from your Mac will automatically be muted.

I’m fairly accent-free, as Americans go, but it took more than just rattling off whatever I wanted my Mac to hear to get Dictation to understand me.

You’ll hear a chime, letting you know you can start speaking. You’ll want to make sure you speak clearly and enunciate well. I’m fairly accent-free, as Americans go, but it took more than just rattling off whatever I wanted my Mac to hear to get Dictation to understand me. When you’re finished speaking, click Done or tap any key.

Dictation will then display whatever it heard, for better or for worse. For the most part, Dictation got it right the first time. If you were dictating a search query, click the Enter key. If you were dictating into a text document or word processor, this is your opportunity to check for inconsistencies and spelling errors, which unfortunately are bound to happen.

Dictation excels in a lot of ways. It works pretty much anywhere and is easy to turn on and off with the keyboard shortcuts. I’ve had a pretty good run with Dictation’s speech recognition and have been impressed with its lack of errors.

While Dictation is supposed to work wherever you can input text, it sure doesn’t work in Google Docs. It did work in TextEdit and Microsoft Word, which is great, but that’s not where I needed it.

That said, it’s not perfect. I’ve read some articles that were purportedly written with Dictation. That sounds great, but I’m wondering what applications they were using. I typically write in Google Docs, which has its own set of issues, sure, but I can access it wherever I am, so it’s good for me. Not so good for Dictation, though, it turns out. While Dictation is supposed to work wherever you can input text, it sure doesn’t work in Google Docs. It did work in TextEdit and Microsoft Word, which is great, but that’s not where I needed it.

I also had a huge issue with Dictation recognizing a couple of words. My biggest problem was “spy.” Dictation, without fail, thought I was saying “bye.” Every single time. I tried placing more emphasis on the “s,” but I got all sorts of things out of Dictation then. Around the sixth or seventh try I finally got it to recognize what I was actually saying. Again, while for the most part Dictation’s recognition was flawless, where it did fail, no amount of enunciating and trying again worked for me.

While for the most part Dictation’s recognition was flawless, where it did fail, no amount of enunciating and trying again worked for me.

Possibly the biggest hurdle when using Dictation right now is its time limit. It can only take listening to you babble on for about thirty seconds and then it just sort of gives up. It won’t even output the thirty seconds of speech it just heard. So if you’re using Dictation to write an essay or dictate a letter, you’ll need to do it in increments of about twenty-eight seconds, and you’re going to have to be the one with your eye on the clock.

I find the most value from Dictation in dictating search queries, but for long form dictation, you may want to look elsewhere. While all of these are definitely drawbacks to the Dictation experience, if you can just accept it for what it is, a limited speech recognition tool, it’s actually pretty great. My “spy” experience aside, Dictation did a fairly good job of recognizing what I was saying, and I can use it just about everywhere I actually want to.

Have you been using Dictation? How has your experience been? Any handy Dictation tips? Let us know in the comments!

Paula DuPont
Paula DuPont is a New Orleans-based ukulele player, writer, and geek. She has six cats, but only one has a Twitter account.
hellotherepaula
Weekly email summary