How can Mac owners run games on par with those in the Windows PC world? What is Steam and how do you install it? What are the known caveats? Can the Mac actually rival the PC in its gaming abilities? Find out all this and much more in this down-to-the-basics article about Steam on OS X.

Throughout the ages, most of the Mac crowd has been ridiculed by the PC nation for the inability to run "real games" on their machines. While it's true that Apple devices are generally far weaker in stats than their price-comparable brethren in the PC world, that's not necessarily a black-and-white bad thing. Mac owners know Apple's primary foci are usability, simplicity, portability and design - they sacrifice power in order to get rid of clunkiness and in turn, this makes their machines marginally incompatible with modern games. Does that mean Mac users are doomed to a life of Facebook games and Flash arcades? Not in the least. Enter Steam.

Steam is, put simply, an entertainment platform with the following functions:

In very simple terms, Steam is a program you install on your computer which serves as a gateway to an online store of games. When you purchase a game, it gets downloaded and installed by this program (called the Steam client), and appears in your library of purchased games.

You can use this client to browse available games, watch trailers and screenshots, read reviews and descriptions and even take your friends' recommendations into account when deciding on a purchase - it's all visible on a game's promotion page.

While we won't be purchasing any games for the purpose of this article, Steam does offer some free to play games as well so we'll try those. Let's install Steam first. Go to their about page and download the client via the big green "Install Steam Now" button.

Once it runs, you should see a login screen. Create a new account or log in with your old one if you have one, and let it load. 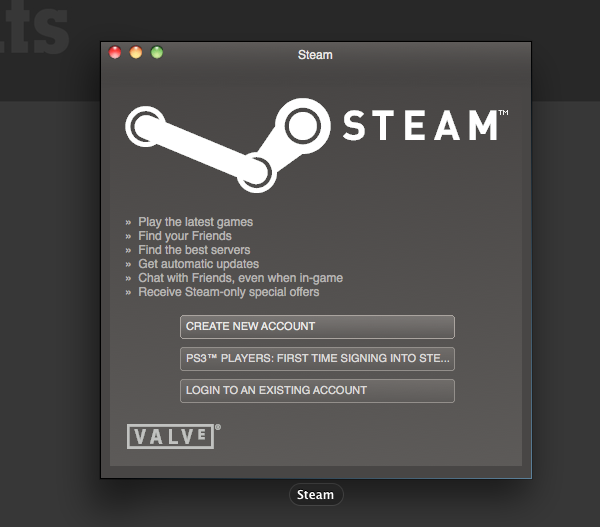 If you used Steam on another machine before, it's possible Steam Guard will require you to confirm the use of another computer to access your Steam account. This is a safety measure that only happens if you have and old account and Steam Guard active - I recommend you turn it on via Steam > Preferences > Account / Manager Steam Guard Account Security.

Finding and Installing a Game

While the number of available Free to Play games for OS X is rather low at the moment, we can try it out on a highly representative example - Valve's own Team Fortress 2, a free to play shooter (Valve is Steam's parent company). Enter Team Fortress 2 into the client's search bar and click it when it appears to open the Team Fortress 2 game promotion page. Look at some of the videos and screenshots if you're interested, and then find the green "Play Game" button.

You'll notice there are two icons next to it - an Apple logo, a Windows logo and a "SteamPlay" badge. This means that this game is available for both Windows and Apple computers and even supports cross-platform multiplayer, which means you can match up against players on the PC. For non-free games this also means you can buy it only once and play it on both Windows or Mac, as long as you log into your account - no need to buy one version for each platform.

The SteamPlay badge lets you purchase a game once and play it on both Windows and Mac (and Linux, once Steam for Linux is released)

Once you click the Play Game button, the client will pop up a dialog to guide you through a two-step installation start procedure, and will then take you to your games Library where you can monitor the download progress. Depending on the speed of your internet connection, this might take anywhere from 4 hours to 30 minutes - the TF2 game is 10GB in size, which took around two hours to download on my machine. To see details about the actual download, click the "1 item downloading" text near the bottom of the client screen.

Trying Out Your Installed Game

Now that our game has been downloaded and installed, let's try running it. There are several ways to do this, depending on whether or not you told the client to make Application/Desktop icons during installation, so let's just use the standard way which works for everyone and go to our Library in the Steam client, and double click Team Fortress 2. The game should start without problems and you should find yourself in the menu screen. From here on out, follow the game's directions and go through the tutorials to become familiar with it. 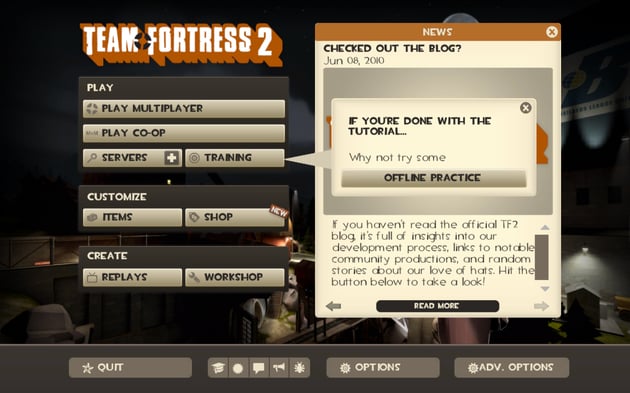 If you don't know what this means, or if you have no idea if you have a case-sensitive boot partition, you can skip this section, you're most likely in the clear. Otherwise, please follow the instructions provided here. The instructions were harvested and compressed from this article.

If the above line gives you a "File exists" error, do the following:

Once done, you should be set. Try running Steam now by going into your handmade Steam image and double clicking Steam.app. If it still doesn't run, post in the comments and I'll do my best to help you out.

Note: If you installed Steam this way, make sure you unmount our handmade image after gaming to save some resources. When you want to play again, just re-mount the image.

In this article you've learned how to use Steam and run PC-level games through it. We've also covered miscellaneous installation caveats and some terminology you might see on a game's promotion page. You are now ready to become a gamer on OS X! One final note of importance - Steam requires you to be online in order to run most of its games. This is both an anti-piracy and anti-cheat measure, and there is no way around it unless you pirate the games. Don't do that, support the developers that make them!

Now search the store and find some games to play with your friends and family - spread the word and help build a Mac gaming community! Remember to post your feedback, problems and questions in the comments, and as always I'll do my best to answer them.