GarageBand is an awesome beginner-friendly music application which can be used for capturing and manipulating audio, making music with virtual instruments and recording your own professional sounding podcasts, plus more. All that’s required is the desire and patience to learn!

To get started with GarageBand, we shall begin by first discussing the basics behind computer music software and virtual instruments, in addition to looking at recommended hardware to help you on your way. All this will provide a foundation for future guides, in which we will record a whole song and more.

GarageBand is referred to as a Digital Audio Workstation or DAW. If you've never considered using a computer for music before then you've lucked out by buying a Mac, because though you can debate which professional application is the best or most well-rounded, I think it's fair to say that GarageBand beats them all in ease of use and simplicity.

Broadly speaking and ignoring the more advanced niche coding software, there are two main ways to make music with a computer - using the computer in place of a tape deck with microphones plugged in, to capture 'real' sounds like vocals, or making the audio within the computer itself, with virtual instruments. Today we'll be focusing on the latter.

In order to ensure we're all on the same page, let's first grab GarageBand and fully update it. If you haven’t yet got a copy of GarageBand, head over to the App Store and grab it now for a very reasonable $14.99. This guide was written with GarageBand '11 in mind, but GarageBand '09 should work with some minor changes.

Tip: Though beginner-friendly, GarageBand is far from limited and there's a long list of artists who have used it to great effect, such as Rihanna on her hit "Umbrella"

What Are ‘Virtual Instruments’?

First off let's run through what a virtual instrument (also known as soft-synth or software synth) actually is:

In the past, if you were in a standard four piece rock band with a singer, drums and guitars, but decided you wanted a short Saxophone solo to complement your song, another musician with the required skills would be needed. In the wake of home computer music software however, both budding and established songwriters are able to make use of computer-made simulations of real-life instruments.

When virtual instruments first appeared they were rather rudimentary and unlikely to fool anybody into thinking they were hearing a real instrument being performed, but over time the software has matured and reached the point that the average person’s ears won’t know the difference between sampled or synthesized virtual instruments and the real thing, if used correctly. Many movie scores, TV shows and albums are based around virtual instruments, in addition to the more obvious application such as within the electronic music genre.

A MIDI Interface Makes All The Difference

Virtual instruments reside within GarageBand but it is neither intuitive nor inspiring to play with these via trackpad or with your Mac's own Qwerty keyboard. Though I am reluctant to encourage spending your hard-earned money when only just embarking upon making music, a MIDI interface really does make a huge difference when creating music on a computer and I recommend you purchase an inexpensive interface if possible in order to get the most from your Mac. 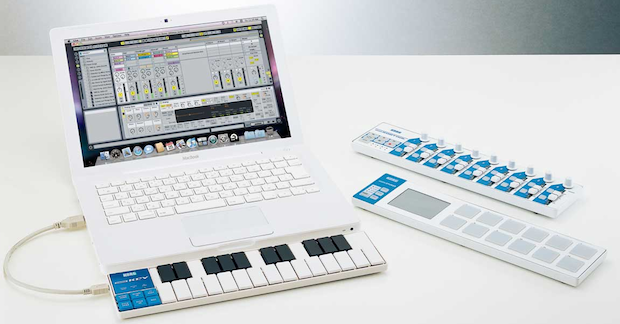 A keyboard MIDI interface looks much like a standard beginner's Casio electronic keyboard, the type which we've probably all seen at some point when growing up. Rather than containing its own speakers or connecting to an amp however, the MIDI interface plugs directly into a computer (usually via USB) and sends data to the Digital Audio Workstation, in this case GarageBand, which then produces the desired sound.

Should you indeed wish to purchase a MIDI interface, a great place to start is the Korg NanoKey. It's a small, lightweight portable interface about the length of a standard white MacBook and can be bought online from major retailers for approximately $30-$40 if you keep an eye out for a bargain. As with most interfaces of its kind, the NanoKey is designed to work with GarageBand without fuss, so all that is needed is to plug in and play.

Tip: MIDI is a complex subject in itself and I'm barely skimming the surface of it here in order to give a basic view of how MIDI is applied.

Okay, now that we've covered some of the basics, launch GarageBand and let's begin playing some music!

Upon launching GarageBand you should see the above splash screen which lets us choose between various options. We're going to cover most of these in subsequent tutorials but for now let's keep it simple and click on 'Piano' then the 'Choose' button on the lower right hand side of the window.

Following the splash screen, you should now be presented with the window titled 'New Project From Template' shown below. You can leave all the settings as they are for now, though it may be a good idea to name your Song something memorable, such as 'GarageBand Draft 1'.

Once GarageBand has launched, you should see something very similar to the above screenshot, with a Grand Piano track already loaded.

If you do not have an interface and wish to use the Virtual Keyboard also visible above, navigate to GarageBand > Window > Keyboard and click your pointer to 'press' the keys. Alternatively, should you want to give Musical Typing a try, go to GarageBand > Window > Musical Typing and use your Mac's keys. If you do have an interface like the Korg NanoKey, then simply play the keys and have some fun!

Take some time to play around with the Grand Piano and get a feel for how it sounds. 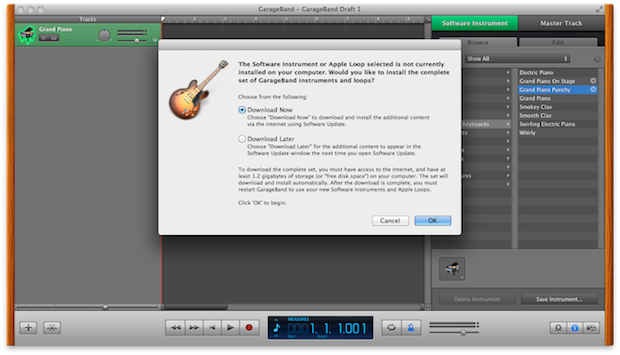 Downloading all of GarageBand's instruments & loops takes up approx 1.2GB

Though the Grand Piano is fine in itself, let's make things a little more interesting by having a browse through GarageBand's other instruments. The 'Software Instruments' pane should already be visible to the left of your GarageBand's screen but if it isn't, hit the track info button, which is located in the bottom right hand corner of your screen.

Depending on the method by which you installed GarageBand (e.g. iLife or App Store), you may not have all the instruments and loops downloaded. To bring up the instrument download screen as shown above, click on an instrument which has a small arrow to the right of it.

Browsing instruments is fairly self-explanatory, simply choose the category of instrument from the left hand pane (such as Organs or Horns) and then select the instrument within that category (Pop Organ or Trumpet Section). You need not move on from this step for now at least, just keep testing out the different sounds. This is not time wasted, as in future tutorials it'll come in very handy to build up a mental image of what the instruments sound like.

I hope this first in a series of tutorials has given you some grounding in the very basics of GarageBand in preparation for recording some tracks. Though those who are more advanced may find little to stimulate them here, I hope that the next tutorial should offer more knowledge or at least a different perspective on existing recording methods.

If you have any questions or problems, please let me know in the comments and I'll do my best to talk you through it.