In our previous look at using GarageBand, we discussed the basic principles behind creating music with a Mac and GarageBand, talked about what terms like MIDI and DAW mean and dipped a toe into making music with virtual instruments.

Hopefully by now you've had a chance to get familiar with the basic sounds that come with GarageBand by default, because now we're going to record a simple song using virtual instruments!

Your taste in music is a highly personal choice which reflects your own personality, so you're likely to chafe at some of the stylistic decisions I make in this and subsequent tutorials as I attempt to cater to as many readers as possible. The important thing to remember is that we don't have to agree on what sounds great to begin making music - once you have the basic principles down, you can implement everything you've learned and use them for your own goals! 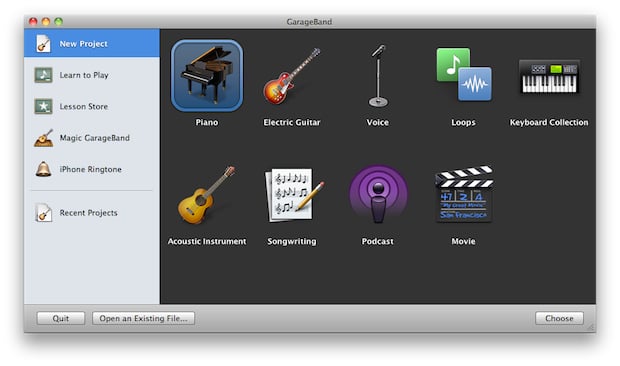 Creating a new project in GarageBand

I think that the best way to approach this particular tutorial is to create a very basic song, which will give you a foundation to build upon. We'll create a simple drum track using Apple Loops and then add another loop of guitar. Following this, we will use an interface to play some synthesizer, then top it all off with some rough vocals, if you wish to sing.

Let's start with a clean slate and create a fresh GarageBand project by launching GarageBand and selecting New Project > Piano. You can leave the Tempo, Signature and Key settings as they are, but be sure to change the song title to something memorable like 'Virtual Instruments Tut - Song 1'. You should now be presented with a screen similar to the one below.

In order to make sure we're all on the same page, navigate to the menu and select Track > Delete Track and we'll have a completely fresh project with which to begin. This done, let's move on to making our rhythm track!

GarageBand comes with a few different choices to get started making beats but for this article we're going to use the simplest: Apple Loops. Bring up the Apple Loops browser by clicking on the small loop icon, shown toward the right hand side of the above screenshot. When selected, it will be highlighted blue and you'll be presented with a screen similar to the one shown below.

Click on the 'All Drums' tag and preview a few of the loops by simply clicking on them. The loops which a blue icon next to them are audio samples, while the green icons are MIDI or softsynths. I've chosen a very simple and basic beat to get us started, 'Modern Rock Drums 01' - so drag that over to the left and into GarageBand's main window, where a new track will now be made for it.

Tip: Remember that hovering over a button will bring up an explanation of what that button is for.

Working within the track, hover your mouse pointer over the right edge of the loop which you've just dragged and the pointer should turn into a small loop icon. Hold down your loop pointer and move it to the right for approximately 40 measures (around 1 minute 20 seconds of audio) - in order to do this you may need to drag the playhead to the right a little.

Now that we've got a beat, the metronome can be disabled. The metronome is located just to the right of the Play, Pause and Stop buttons - it looks like a small box and should be glowing blue. Once this is done, save your progress and have a listen to how the beat sounds so far. 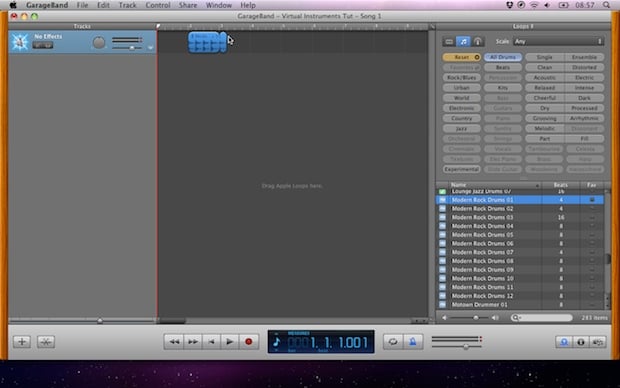 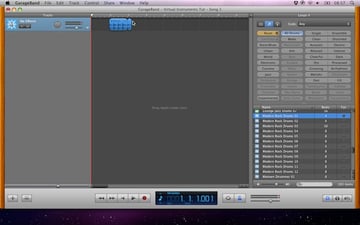 Drag the Apple Loop onto your empty track

Now that we've got a basic rhythm for our song, it's time to add some guitar! Following the same steps laid out above, bring up the Apple Loops browser again, this time selecting 'Guitar' from the tag selection pane. I decided upon a loop named 'Spacious Guitar 01' but feel free to experiment. Next you need to once again hover your pointer over to the right of the icon and drag it to the right, so that you have something similar to the above screenshot (notice that I left the drums playing for two beats as an intro).

Stop and take a moment to listen - I think our song is starting to sound pretty good, but using only loops will get boring after a while, so let's play something of our own to complement what we have so far.

Tip: Save frequently to avoid lost work and always remember that there is an undo function to save you from mistakes. 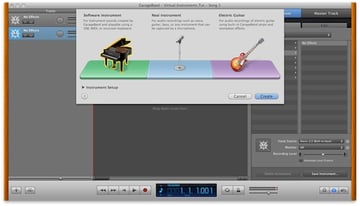 As we previously discussed, this is where a USB interface will come in handy, though to be sure it is possible to record your parts without one (and I have indeed done so, in a pinch).

Create a new track by choosing Track > New Track and when prompted, select 'Software Instrument' as shown in the screenshot above.

I want to play something over my two existing loops and I've chosen a suitable virtual instrument; a nice, thick synth pad located at Synth Pad > Aquatic Sunbeam. A common misconception for non-musicians is that it takes a lot of training or experience to begin playing their own music - of course it's very useful to have such skills, but the fact is that anyone can begin writing simple songs right away. Don't worry too much about scales, rhythm or anything else for now, just play along to the music and if you like how it sounds, that's good enough!

Hitting record, I waited until a few bars of music had passed to get a feel for the rhythm and then played a synth part which is about as simple as it gets: just two notes alternating to the beat, up until the end of the song, where I hit stop. I like how that sounds but it's a little low in the mix, so using the small volume slider seen on the left of the screenshot below, I slid my synth up to maximum volume.

Playing a very simple synth part with a USB interface

Notice how the music I've just recorded is represented by solid straight-line bars in a green icon? Well, we're going to cover MIDI editing in a later tutorial, but just know for now that everything we've played is fully editable and those bars can be moved, copied or cut, opening a massive scope for songwriting and composing.

Tip: If in doubt, play less. Simple, tasteful backing is much easier to achieve than virtuoso soloing and you can build layers of simple tracks into something that sounds more complex.

Now that we've got a simple three-track foundation, you can decide whether to continue adding layers of instruments and loops or even include some vocals. To be sure, you'll need a proper microphone setup for capturing good quality vocals, but for demo-quality singing, we can make use of your Mac's built-in microphone. 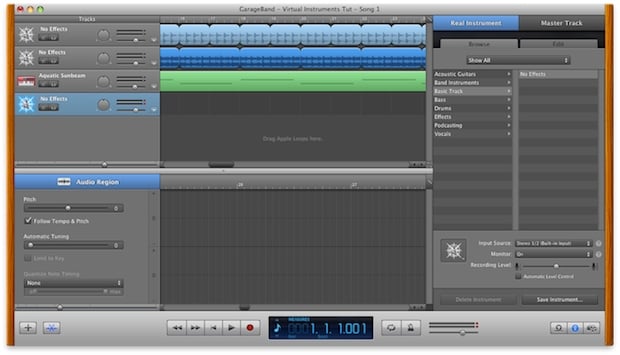 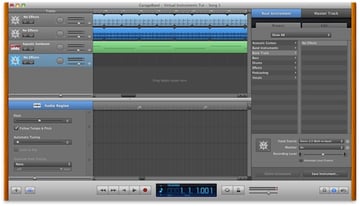 Turn on the monitor to hear your microphone when not recording

First lower your Mac's volume for a moment as microphone feedback can get nasty. Click on Track > New Track > Real Instrument and the 'Track Info' pane should also appear to the right of your screen, if not, click the small 'i' icon which is highlighted blue in the screenshot above.

Click the drop-down selection to the right of 'Monitor' and select 'On' so that you can hear the microphone input, then play through your song a couple of times, practicing as you go. Once you're ready to record vocals, hit record and sing over it. Upon recording your vocals, you will probably need to adjust the tracks volume slider in order for it to be heard in the mix.

By following this same method, it is possible to add any acoustic instrument such as flute, acoustic guitar, or whatever. Without a real microphone you're not going to get great quality, but your Mac's built-in mic should at least offer a handy sketchpad to demo ideas.

Congratulations you've now created a simple song within GarageBand! Though it is still somewhat rudimentary and lacks a proper structure, the above steps will prove a solid foundation when we get into more advanced techniques such as MIDI editing, recording 'real' audio with a microphone and more. If you feel confident with what we've covered, I would suggest that you go through the steps above at least once more, but supplanting my choices with those that are completely your own while adding more tracks.

In the next tutorial we're going to build upon what we've discussed here and create a significantly more complex song, relying less on Apple Loops and taking a look at basic MIDI editing in order to make something more unique.