So far in our series of making music with GarageBand, we've taken a look at getting started with GarageBand, and have then moved on to creating a simple song in GarageBand using virtual instruments. We’re going to continue to step up the complexity to make more unique, nuanced songs but I felt that before getting more advanced with virtual instruments and editing MIDI, it’s high time that we took a moment's pause to look at the basics of recording electric guitar.

Though this article is catered toward beginners looking to use their computer to record electric guitar. Electric bass works just the same and it will mostly be applicable to other instruments, like keyboards and drum machines.

The Principles Of Recording Electric Guitar

Recording electric guitar is one of those areas with a long history of experience and expertise for beginners to draw from, but the problem is that new musicians often fall into a trap of spending a lot of money in order to play a few chords and get a demo onto CD, when the same could be achieved far cheaper.

New musicians often fall into a trap of spending a lot of money in order to play a few chords.

I'm not going to suggest that spending money on fancy microphones, interfaces or even an entire home studio is a waste of money by any means; rather, it's unnecessary for beginners to worry about unless they decide to pursue music more seriously. With all this in mind, let's outline how guitars are generally captured in a professional studio and then how to do so on a realistic budget.

In a professional studio situation, we could record electric guitar by plugging our guitar into an amplifier of reasonable volume and setting up at least three microphones. One close to the amplifier, right up against the speaker grill, the other a little further back and in the middle, with a final microphone placed yet further still to pick up the room's natural acoustics as the sound waves interact with the environment - each microphone then needs a powered pre-amp and to be mixed.

Even while simplifying it, that sounds like a lot of equipment and expertise for a demo and to be frank, I believe it would be overkill for a beginner.

Apogee is a company with an excellent reputation in professional audio equipment so it was a welcome surprise when they decided to produce a product catering toward the beginner and at a price of just $99. One of the great plus points when considering the Jam is that it works with Mac, iPhone and iPad so if you've already got an iOS product then it can be used as a very portable sketchpad too.

Using the Jam is easy, just plug your guitar into it with a guitar lead and then plug the Jam into your Mac, iPhone or iPad - it's powered off the USB so there's no need for batteries and the interface comes with adaptors for both Mac and iPad/iPhone.

The Jam is great but it is limited to recording guitar or bass directly and while this is often perfect for a solo musician, if you're recording a band environment, you'll want to hook up some other instruments to your Mac and maybe a microphone too - this will all mean more interfaces and more money spent.

I haven't got some kind of secret sponsorship deal with Apogee, I promise. I just think that they best represent both sides of the home recordists' choice. If you are willing and able to make the additional monetary commitment, the Apogee Duet is a fine choice of interface which comes with four inputs, able to handle microphones, guitar or other sources such as a drum machine.

I know several musicians and one mastering engineer who use the Jam as their go-to recording interface and it's a popular choice for 'serious' musicians.

If you can justify spending the money, Apogee's Duet is a great sounding interface

The big step up in flexibility does come with significant cost: the Apogee Duet 2 retails at $595.

If you want more flexibility than the Apogee Jam but don't want to shell out for a Duet then M-Audio's Fast Track Pro may be best for you. It's a fairly simple interface which can accept four inputs, so you can run a guitar and microphone at the same time. The on-board pre-amps don't blow away the listener like the Duet but I've owned one for some time and am happy with it overall, especially for the retail price of approximately $250.

We'll need to explore what GarageBand can offer guitarists in more detail but for now I'd like to quickly cover some of the more notable features below.

GarageBand's effect pedal selection is impressive and contains all the staples for any guitarists collection, such as Fuzz, Overdrive, Phaser, Delay, Wah, Echo, Chorus and more. Each can be combined and, just like real life, where you place the pedals in the effect chain alters the eventual sound.

Tip: Remember that you don't only have to use GarageBand for recording, the effects pedals and amplifier are great for normal jamming and songwriting. 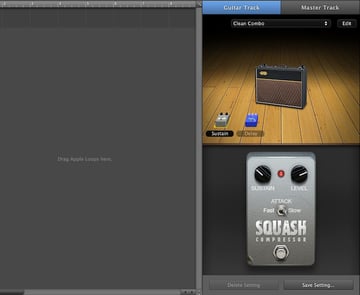 Though they are not identified as such, GarageBand contains several amps which bear a strong resemblance to Marshall, Fender and Vox amplifiers. There are a lot of options for adjusting EQ levels but helpfully there's also many presets to guide the user in achieving a desired sound.

GarageBand also contains a lot of amp choices too

Recording guitar into a DAW and making it actually sound halfway decent used to be a real challenge for the novice user but recent technology has enabled us to simplify the process a great deal. Hopefully this brief overview will give you something of an idea where to start with recording guitar on GarageBand and when we look at incorporating guitar into a complex song, you'll have an idea of the basics.

If you've never had the opportunity to experiment with many pedals or amps then GarageBand can be a lot of fun, just grab an interface and plug in your guitar to begin making some great sounds!