Get to Know Your Utilities Folder: 7 Great Apps You Should Be Using

We've all done it. We bring home our shiny new Mac and we fire up all of the standard apps. We get our iChat account set up, link Mail.app with our mail accounts, and start putting dates into iCal. We import our music into iTunes and sync it up with our iPhones so that everything stays in order. Once we're all set up, we launch Safari and we're off.

But tucked away in the Applications folder of every Mac is a collection of gems that many users may never even notice are there: the Utilities folder. There are several applications in the Utilities folder, many of which likely won't appeal to you. Today, however, I've selected a few of the most useful utilities with which to get acquainted. So let's get started.

After much deliberation, I've opted to discuss Airport Utility first. After all, if you're like me, your computer turns into a shiny aluminum brick if the Internet goes out.

Airport Utility, for most people, will run once you get the Internet set up and will rarely (or never) get launched again. However, it's important be aware of some of the power packed into Airport Utility in case you ever need it. You'll want to visit this app any time you want to set or change the password for your wireless network, change the name of your wireless network, or add a device (such as an Airport Express or a Time Capsule) to your network.

And of course, as with most apps on this list, Airport Utility packs a whole host of features for the more network-inclined users.

Another utility that I deemed worthy of a spot near the top of the list, System Information catalogues all the specifications for the machine you're using. You'll want to be intimately familiar with this information if you ever need to get over-the-phone technical support. 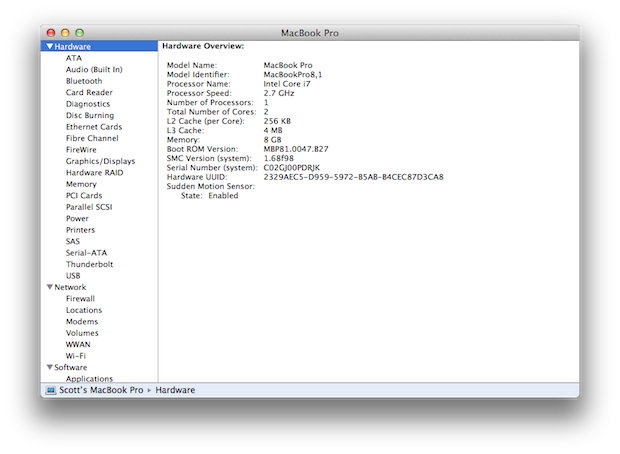 Not only does System Information give you excruciatingly detailed data on the hardware inside your machine, but if you scroll down in the sidebar a bit further, you might be surprised at how much information you can learn about your network or the software installed on your computer as well. Do some exploring and see what you can find out about your Mac!

Activity Monitor is one of my favorite apps in the Utilities folder, as it can be extremely useful when trying to pinpoint a problem on your Mac. If things are running sluggishly, or if your computer is exhibiting some annoying behavior that is out of the ordinary, there is likely a rogue process to blame. And Activity Monitor will help you find it. 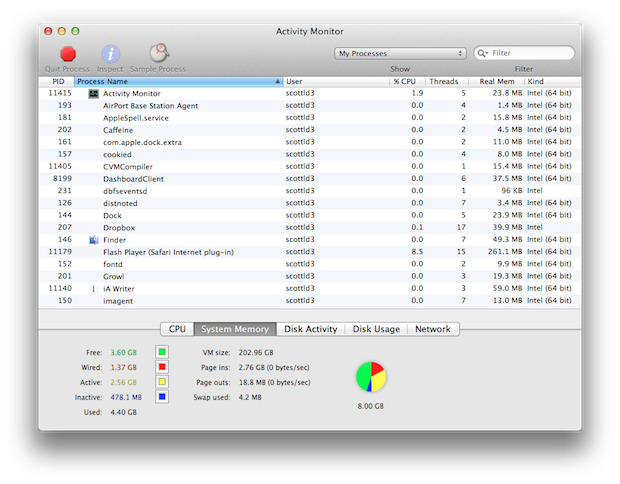 In addition to listing all of the processes being executed (and being able to sort them in various ways), Activity Monitor is also capable of giving you detailed in formation on CPU usage, disk usage, memory usage, and network behavior.

Keychain is one of those apps that might only be useful to you once in a very long while, but I promise you, if you think to use it, you will be very relieved. 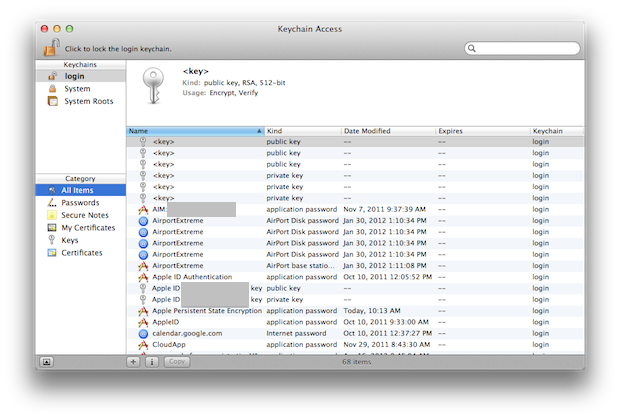 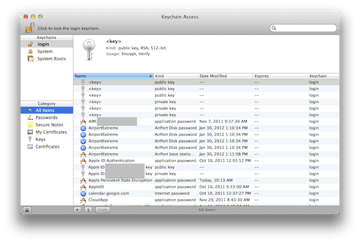 A repository for all of your secure data keys

Keychain is where your operating system stores of all of those passwords and keys that you need to have, but don't necessarily need to use every single time you use something. For example, your iChat login credentials will be here, as will the password for your secure wifi network.

The relief to which I'm referring above came to me like this: I had a friend visit from out of town for the weekend and he brought his laptop. After getting settled, he opened up his computer and asked me "What's your network password?" I panicked. I knew that my password was a complex alphanumeric key, but I hadn't the slightest idea of what it was. My computer remembers it, so I rarely have to know it off the top of my head. And of course, like a fool, I hadn't written it down anywhere. I took to Keychain to find the password for my wifi network, and the day was saved.

This little guy deserves a mention on this list, despite it's downfalls, which I'll cover in a moment. First, the short version: Grab is a screenshot utility. 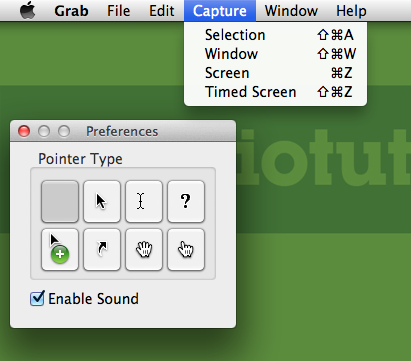 Now, even the most un-savvy user is likely to be aware of our shift-cmd-3. As Mac users, it's our Print Screen key. And we've even got shift-cmd-4 for capturing a section of the screen as an image. Grab, however, gives you some (but not much) more functionality when taking screenshots (such as the ability to include a cursor).

I work with screenshots on a daily basis, so I've gone ahead and invested in a decent set of tools for managing them. However, not all users would find that a cost effective option, on the rare occasion that they might need a bit of extra "oomph" in their screenshots. For those users, knowing that Grab is there can definitely be very handy.

Ah yes, Terminal. I'm no command-line ninja, so I won't be giving you the ins and outs right here, but it's definitely worth noting that Terminal will give you access to your system in ways that your graphical interface can not. 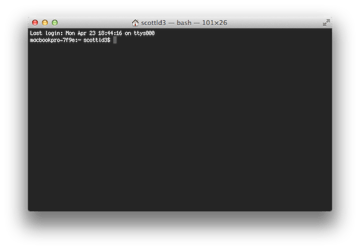 We recently kicked off a series of posts detailing how to use Terminal, so check it out here if you're interested in learning more.

As the final entry on our list of Utilities you should know about, I offer up Migration Assistant. Our PC-using friends will find this utility especially helpful, as Migration Assistant will make it a breeze to transfer data from their Windows machine to a Mac (or from Mac to Mac!).

Of course, you can also transfer data from your old Mac to a new Mac

Basically, if you buy a new Mac and need to copy over any data from your old machine, this should be your first stop.

There You Have It

As I said before, these are only a handful of the apps in your Utilities folder that I thought you might find useful. There are several others that you might find right up your alley, so poke around* and see what you find!

*Please exercise caution, as certain apps (like Terminal and Console) have the capacity to make potentially dangerous changes to your machine if you don't know what you're doing.