Going Further with the Option Key in Mac OS X

For the most part, the Option key sits innocuously to either side of the Command key, not getting near as much play as its merits. It can’t change case like Shift, help with copying and pasting like Command, or even just give two button mouse functionality. Nevertheless, the little Option key packs a big punch, and we’re going to put it through its paces.

Rather than being used to access hotkeys or menus, the Option key, denoted with the funny ⌥ symbol, is a modifier key. It's a way for Mac users to get to accents and symbols without whipping out the Character Viewer, but the Option key is also a powerful tool for accessing some pretty useful commands.

The Option key is also a powerful tool for accessing some pretty useful commands.

Using Option to Improve Your Workflow

The Resume feature in Lion is both a blessing and a curse. While I’ve been saved by Resume pulling up a lost document, I’ve also reopened TextEdit to find ten half-written letters and articles that I’d forgotten about entirely.

It’s easy enough to turn Resume off on exit without disabling it entirely, though. Hold Option while clicking the Application menu, and you’ll have the choice to Quit and Close All Windows, effectively temporarily disabling Resume. 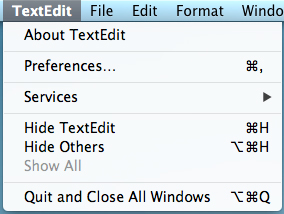 Option allows you to Quit without Resume kicking in.

Most of the really good stuff happens in the menubar, though. Hold down the Option key while clicking the volume indicator in the menubar. Instead of the usual volume slider, you’ll get a menu to select input and output devices. You can also choose whether to use your Mac’s Audio Port for input or output. 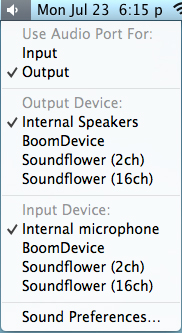 You can skip System Prefs by accessing the same options in the menubar.

You can also get some bonus information with the Option key. Click the battery icon while holding Option, and you’ll get your battery’s condition. Option plus a click on the Wi-Fi indicator gives you more information than I personally need, but it’s there for those who do want it. Option+click on the Time Machine menubar icon allows you to browse other back up disks or verify your backups.

Click the Apple menu while holding the Option key, and About This Mac becomes the more useful System Information. Sleep..., Restart..., and Shut Down... all lose their ellipses and won’t prompt you before doing their jobs. 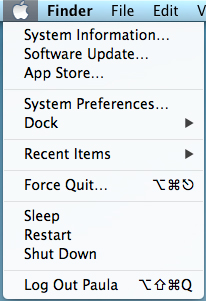 Holding Option while clicking the Finder menu allows you to likewise empty the Trash without having to confirm that you really do want to empty the trash after all. Option+File menu gives you all sorts of new choices, among them the ability to open a file in a new window, designate a new application to open a file, use Slideshow instead of Quicklook, and Close All windows.

Using Option in conjunction with the Edit menu allows you to Move an item rather than Paste it into a new location.

Using Option in conjunction with the Edit menu allows you to Move an item rather than Paste it into a new location. To copy files while dragging them, hold the Option key. Your pointer will change to the Copy Pointer, indicating that everything selected is being copied rather than moved.

This works for objects when you’re working in some applications, too. Holding Option+Command while dragging files will allow you to create Aliases of all selected files. You can copy and create aliases via dragging both in the same folder as the original files or by dragging to a different folder.

When you click on the Go menu while holding down Option, it gives you access to your Library folder.

Most of these you can get to with a few additional steps or by using your mouse, but for those times when it’s just easier to keep your hands where they are, on the keyboard, here are some Option key shortcuts to make things a bit easier.

When you log out, you’re asked to confirm that you actually want to logout, and if you’ve already moved on and don’t react to the prompt, OS X won’t actually logout for about a minute. To skip all of that, Option+Shift+Command+Q will immediately log you out of OS X.

You’ll still be prompted to deal with unsaved files, though, which I can only see as a good thing. If you only need to put your Mac to sleep, Option+Command+Eject does the job.

Control+Option+Command+Eject is a handy shortcut that quits all open applications.

Most people know that Option+Command+Esc will bring up the Force Quit window, but if you’re having major issues and need to close an application right now, holding Option+Shift+Command+Esc for three seconds will force quit the current application (keep in mind this will only work on OS X 10.5 and up). Control+Option+Command+Eject is a handy shortcut that quits all open applications.

With the exception of Force Quit, perhaps my favorite Option key go-to is when I need to temporarily change my default Startup Disk. I can skip System Preferences altogether if it’s just a one-off by holding the Option key during startup. This will display all bootable volumes, useful if you need to boot to a recovery or install disk.

Option+Command+I will Show Inspector, which is sort of a better, faster, stronger version of Get Info.

Once you've turned your machine back on, Option+Command+F navigates to the search field in an already open Finder or Spotlight window. This works in many other applications, as well.

For instance in Safari, rather than searching the text of the current page, as Command+F would, Option+Command+F moves the cursor to the search field and lets you enter a new query without using your mouse.

Option+Command+I will Show Inspector, which is sort of a better, faster, stronger version of Get Info. Inspector will show you all the information on one file, but it floats above the Finder until closed and the information inside will change each time you click on a new file. You can use the Option+Command+I Show Inspector in other applications that have an inspect function, such as iCal and Google Chrome’s Inspect Element.

Option+Command+I will Show Inspector, which is sort of a better, faster, stronger version of Get Info.

Those shortcut keys along the top row of your keyboard that adjust volume and dim the screen work with the Option key, too. Holding Option while tapping any of those keys will bring up its pane in System Preferences. For instance, the keyboard illumination shortcut keys bring up the Keyboard preferences pane when you hold the Option key.

I convinced my husband that my display was shorting out with the Option+Control+Command+, and Option+Control+Command+. keyboard shortcuts, which will decrease and increase the screen contrast, respectively. Option+Command+/ will toggle font smoothing on or off. The first two are really Universal Access features, but all are good commands to have handy if you need to quickly change how things look on your display.

Some of this you probably already knew if you've been using a Mac for very long at all, but hopefully I was able to teach you at least one or two tricks that will serve you well.

Do you have any favorite tricks or tips not mentioned here? How you get the most out of the Option key? Drop up a line in the comments section and let us know!

Paula DuPont
Paula DuPont is a New Orleans-based ukulele player, writer, and geek. She has six cats, but only one has a Twitter account.
hellotherepaula
Weekly email summary