How to Move Your iTunes, iPhoto or Aperture Library to an External Drive

Jordan Merrick Feb 5, 2013
Read Time: 10 min
MediaiTunesiPhotoApertureBackupsHard Drive
This post is part of a series called Data Backups and Storage.
Relocate the Home Folder to Another Drive or Volume
How To Migrate All of Your Important Data To Your New Mac

As Apple moves towards solid state drives for their portable range, users are having to be more frugal with their storage requirements. In this tutorial, we’ll show you how to keep your large media libraries on an external drive and keep your portable Mac from filling up!

Apple is making leaps and bounds in revolutionizing their portable range and one of the ways they are doing this is with the use of solid state drives (SSDs). These are faster, more reliable, require less power and generate less heat than a traditional mechanical hard drive. The downside? The cost-per-gigabyte is a lot higher than a more traditional mechanical drive. 1TB mechanical drives are commonplace but a 1TB SSD is still some way off and one thing is for certain - it’ll be expensive! 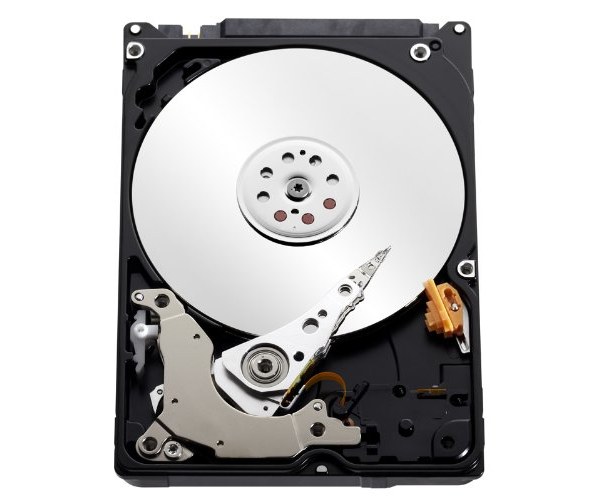 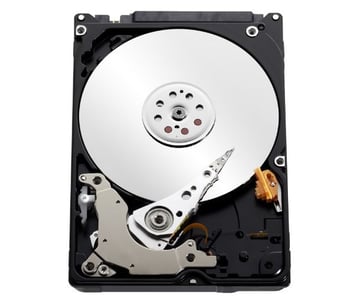 A mechanical hard drive has hundreds of moving parts, but is cheaper than solid state drives 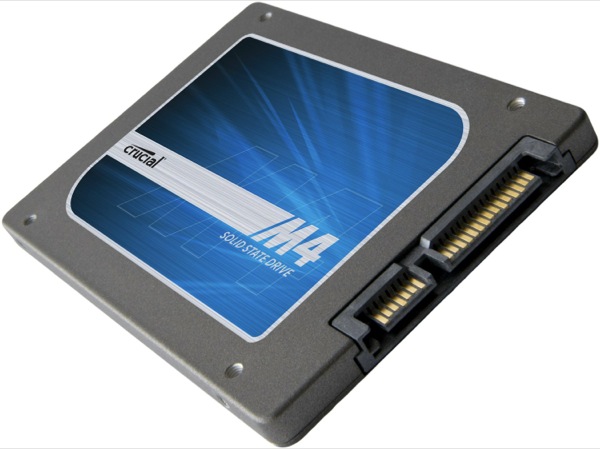 SSDs are still in their infancy and costs will only reduce over time. Just like we saw the first 1GB hard drives and the near-astronomical prices they commanded, the prices will (eventually) come down.

For Apple to switch to SSDs in their portables, yet keep the pricing at least reasonable, the compromise was storage size. With it, this means how we’ve used our Macs on a day to day basis needs to change.
I recently upgraded to a 2012 11” MacBook Air from a 2009 13” MacBook Pro. I’d upgraded the MacBook Pro with a 500GB hard drive yet my MacBook Air only has 128GB. One obstacle was my iTunes library - it currently stands at a rather large 400GB. It doesn’t take a mathematician to work out that 400GB into 128GB just doesn’t fit!

So if you’re in a similar situation, how can you make sure your portable Mac doesn’t get full? As we take more photos, download more music and videos, space is being used up quicker now than ever before . To combat this, we’re going to use an external hard drive. We’ll show you how to move your iTunes, iPhoto or Aperture library to an external hard drive.

Before we begin, we need to plan how much space on an external drive you’re going to need. It’s no good using a 500GB drive if your iTunes library is 490GB!

For any library you’re planning to move to an external drive (any or all of the ones we’ve described) then add up their total size and double it. Here’s an example which was the size of my iTunes/iPhoto/Aperture libraries:

So my total media library storage is almost 500GB, so that means I’d look for a 1TB drive. I opted to purchase a 1TB Western Digital USB3 drive. It was cheap, USB 3.0 compatible (so it’s really fast) and had great reviews.

Why double the space? It’ll save you money in the long run. Sure, you could buy a 750GB drive but the cost difference is almost negligible and you’re future proofing yourself with a larger drive. It might’ve taken me about 7 years to accrue a 400GB library, but the amount of space used each year will likely be more than the last and that sort of trend will continue. 5 years ago, you couldn’t buy HD TV shows on iTunes, now you can. 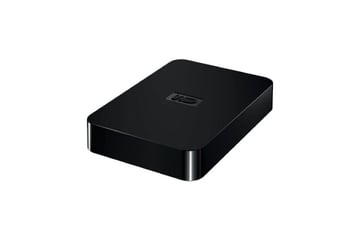 Make sure to invest in a large capacity and high speed hard drive, you’ll thank yourself later!

Tip: Buy a USB3 drive, even if your Mac doesn’t support USB3. Now that Apple includes USB3 on all their portable Macs, you may as well buy a drive that’s future-proof as well as cost effective. It’s backwards compatible with USB2 and usually found to be at roughly the same price as a USB2 only drive. Sure, FireWire 800 is faster than USB2, but USB3 is extremely quick. Plus, FireWire drives usually cost a lot more and when you buy a new Mac you’ll then have to invest in a Thunderbolt-FW800 adapter. Save yourself the hassle and money!

Now we’ve got our hard drive sorted, it’s time to move the libraries! Moving the libraries is actually a very easy process.

For iTunes, we’ll assume you let iTunes manage your music and import it into the iTunes library (default options). If you have set iTunes to not import music so you can keep music elsewhere, you can skip this guide as you’ll know how to move your music anyway. 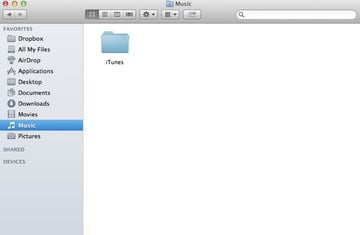 Your iTunes library can usually be found in your Music folder

iTunes will display a message to ask you choose a library, click Choose Library 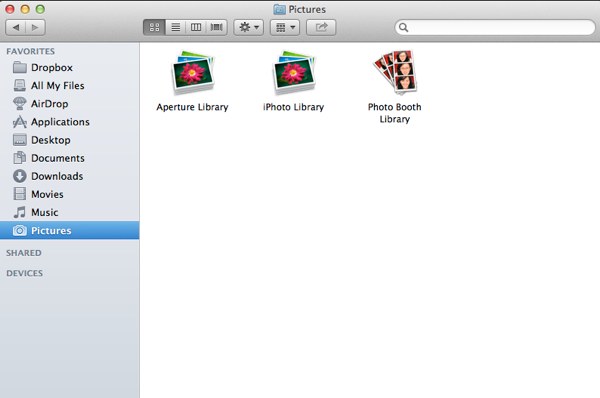 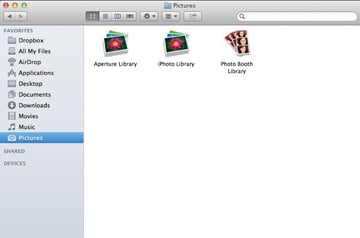 Your iPhoto library can usually be found in your Pictures folder 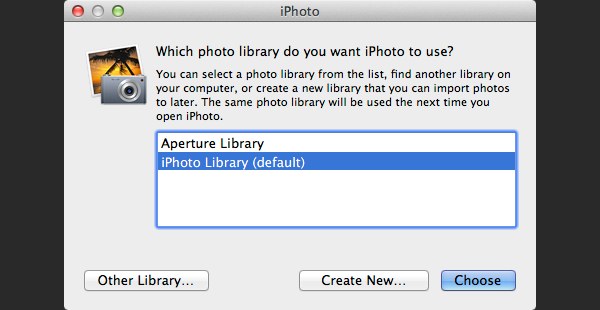 iPhoto will display a message to ask you choose a library, click Other Library

Tip: Unlike iTunes, iPhoto’s (and Aperture’s) library is displayed as a file. It’s actually a folder but appears as an icon to prevent inadvertent damage to it by the user.

Aperture actually works both similar to iPhoto with some important differences. Aperture has two ways of managing photos - the iPhoto way of importing photos into its own library (known as Managed Files), or where only a link to a photo is imported but the original photo is actually kept in a folder somewhere on your Mac (known as Referenced Files).

If you use Aperture with the default settings of importing photos into your Aperture library, then use the following steps.

Your Aperture library can usually be found in your Pictures folder 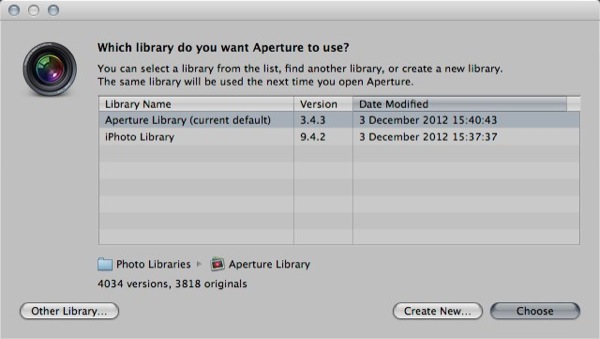 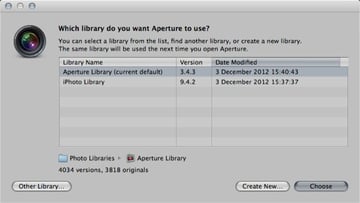 Aperture will display a message to ask you choose a library, click Other Library

Tip: Similar to iPhoto, the Aperture library is displayed as a file but is actually a folder.

Aperture also supports Referenced Files. This works in a more traditional way where you keep your photos on your Mac in folders somewhere and Aperture only manages versions. This means you can have a folder full of photos and importing them into Aperture doesn’t copy them into its library, it remembers that they’re elsewhere on the Mac. If you edit a photo, the edited version is kept inside Aperture, but the original is always in the folder you put it in.

If you store your original images outside of Aperture but just reference them, use the following steps.

Your Aperture library can usually be found in your Pictures folder

Aperture will display a message to ask you choose a library, click Other Library

If you’re using Referenced Files in Aperture, you’ll then need to move your referenced files using the File menu in Aperture.

The last step will move the original photos (wherever they’re stored) to the external hard drive.

Tip: If you’re using Aperture’s Referenced Files feature, then you’re likely to be quite an advanced Aperture user. As such, use the above steps as a guideline to your process. You may have a particular folder structure you want/need to adhere to. You may already have photos stored on a hard drive so consider steps 8 and 9 optional.

There are actually a number of other ways you can manage your libraries on external storage devices (such as network storage) as well as moving parts of your library so you can still have music on the move. For ease of use and to make this tutorial accessible to any level of skill, I’ve kept it to the simplest and easiest way that will benefit most users.

Tip: A common theme you may have noticed running through all my tutorials is the importance of backing up (I can’t stress enough how much a good backup plan is).

Now we’ve moved your libraries to an external drive, we need to have them backing up to your existing Time Machine backup.

Now we’ve made sure our libraries work from our external drive, it’s time to free up space!

Before emptying the trash, open each application. If they all open correctly and everything is working and appears as it should be, you’re all done!

Let’s say you’re at a coffee shop and open iTunes but you didn’t connect your hard drive. iTunes will simply display the same Select Library message we saw when we opened the app while holding down Option. iTunes recognizes the library isn’t present, but it won’t simply create a new one and start getting everything mixed up. At that point, you can connect your hard drive and quit & re-open iTunes.

The same applies to iPhoto and Aperture, they’ll display a message asking you to select a library if it can’t find the default one.

By the end of this tutorial, you should understand how to store your iTunes, iPhoto and/or Aperture library on an external hard drive. Storing your media libraries on an external drive will ensure your portable Mac has plenty of free space and you don’t have to look to delete media just because you’re running out of space. If you’ve used any of these methods or have your own suggestions, please let us know in the comments below!

And if you want to find other ways to get the most out of your Mac, check out the useful Mac apps and utilities on Envato Market.

MediaiTunesiPhotoApertureBackupsHard Drive
Did you find this post useful?
Yes No
Would you like to provide feedback (optional)?
Cancel Submit
Want a weekly email summary?
Subscribe below and we’ll send you a weekly email summary of all new Computer Skills tutorials. Never miss out on learning about the next big thing.
Sign up