How to Reveal Your Library Folder in Lion or Mountain Lion

A Word of Caution Before We Begin

The Library folder at the root level of your hard drive is a public ‘library’ of data that is required for all users of the Mac. The Library folder within the System folder is critical for the operation of your Mac. Don’t ever remove, rename or otherwise move this directory in any way. Leave it alone! 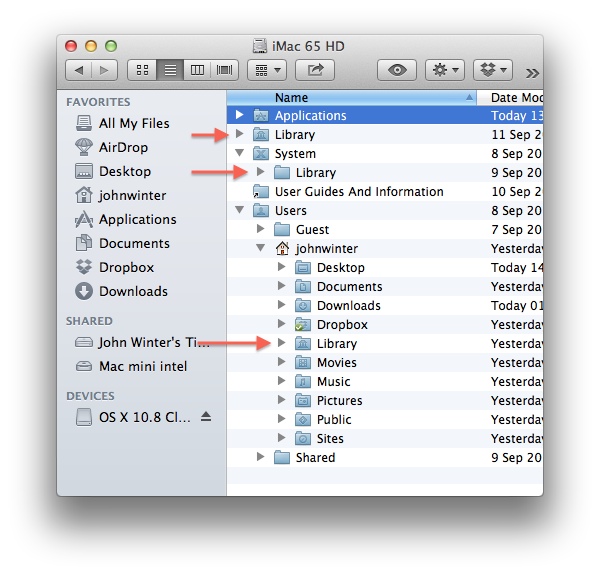 The Locations of Library Folders on Your Mac

The Library folder under each account user name (the ~/Library) is, by default, invisible in Lion and Mountain Lion versions of OS X. It is the folder that stores settings and information for various apps, among other things, and is the one that we will be revealing in this tutorial.

Tip: The User’s Library folder (~/Library) is hidden by default since most people will not require access to it. It is hidden for your own safety as it is an important folder. Don’t reveal or make any changes to this folder if you are not entirely confident as to what you’re doing.

Tip: The Library folder located with any User account is normally referred to as ~/Library.

As soon as you release the Option key, the ~/Library folder will be hidden once more. 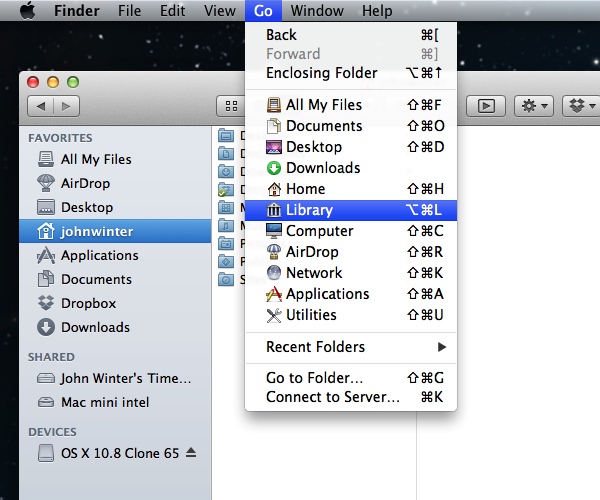 If you want to be really clever, and learn more about customizing your Mac in the process, another way to temporarily reveal the ~/Library folder is to create a keyboard shortcut.

Next, ensure that Keyboard Shortcuts is selected. In the left-hand pane, select Application Shortcuts. Options will be revealed in the right hand pane.

Setting Up a Keyboard Shortcut to the Library Folder

Click on the plus icon, beneath the right hand pane, to reveal a customization window. For Application select Finder, for Menu Title type Library, for keyboard hold down ⌥⌘L (the Option, Command and L keys).

Setting Up a Keyboard Shortcut to the Library Folder 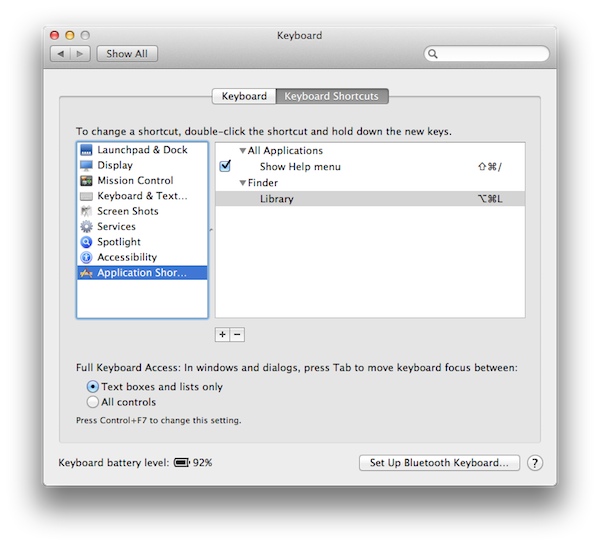 Checking the Keyboard Shortcut to the Library Folder

Now, provided that no particular application is in focus (if you need to be sure, click on the Desktop, first), you will now be able to press that keyboard shortcut to launch Finder directly into the ~/Library folder.

As an added bonus, using this method has also taught you how to setup keyboard shortcuts.

These are just two examples to make your ~/Library folder temporarily visible. It is not an exhaustive list, there are many other ways in OS X to do this. If you can remember these two methods then that should be enough.

The Result of Using the Option Command L Shortcut You Created

Perhaps the most straightforward method of permanently revealing the ~/Library folder is to change it’s visibility settings using Terminal.

To permanently reveal the ~/Library folder, open Finder and select your home directory (often your name), then open Terminal and place it next to Finder. This will help you to see the effects of the commands that you enter into terminal.

In Terminal, enter the following command to reveal the ~/Library folder:

When you press Return, you should see the ~/Library folder appear in the User directory in Finder. 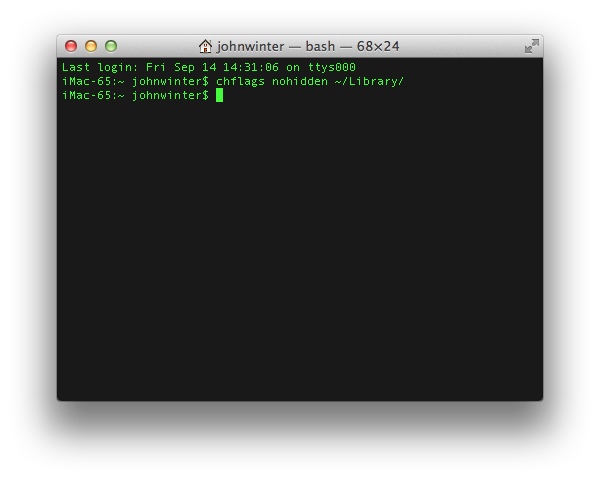 If, at any point, you wish to hide the ~/Library folder once more, simply open Terminal and enter the following command:

When you press Return, the ~/Library folder will be hidden in Finder.

If you prefer not to use Terminal to change the settings on your system, there is a handy menubar application called Invisiblix.

Once again, there are many ways to achieve this in OS X. Popular system tweaking tools, such as TinkerTool, now include such functionality to reveal and hide your ~/Library folder for you.

Unhiding the Library folder is easy enough, but why bother? Let's look at an example. If you have followed my article for setting up VoIP on your Mac, you may have noticed, in one of the screenshots, that there is the ability to customize the incoming ringtone. To do this, you need to have access to your user ~/Library folder. 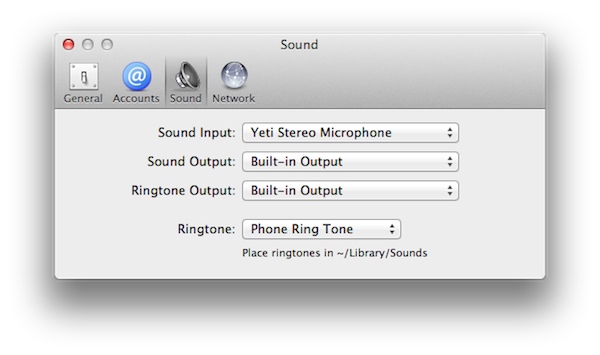 In fact, this is something that you probably will want to do, as the default ringtones are not particularly good for the purposes of an incoming telephone ringtone.

Use one of the methods, described above, to either temporarily or permanently reveal your ~/Library folder. Once you have done so, open Finder and navigate to ~/Library/Sounds.

In this particular example, to customize the telephone incoming ringtone, simply drop an audio file, such as an MP3, into this folder. Ensuring that the file has a sensible name, go to Telephone App Preferences > Sound and you’ll be up to choose your custom ring tone from the Ringtone drop down menu. 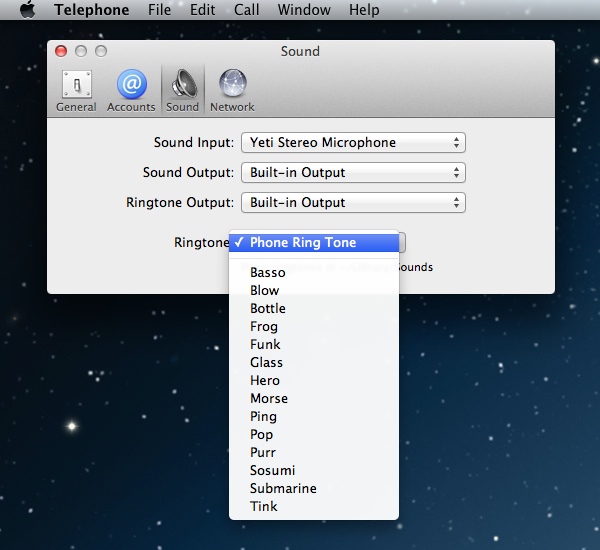 The Result of your File in ~/Library/Sounds/

In OS X 10.7 Lion and OS X 10.8 Mountain Lion, Apple has decided to hide the ~/Library folders. As most users will not require access to these during their day-to-day activities, this makes sense. Hiding the ~/Library folders means there is less risk of an accidental deletion or change being made to a critical file.

We have seen, however, that there may be some occasions when you do need access to your ~/Library folder. In this tutorial, we have learned different ways of doing so. Now go give it a shot!

And if you want to get more out of your Mac, have a look at some of the Mac apps available on Envato Market.

Johnny Winter
Editor and author
A regular contributor to Envato Tuts+, Johnny has been online since 1995 aiming to use the internet for the creation and sharing of knowledge for the greater good. Via setting up mailing-lists, forums and e-commerce businesses, Johnny has been an accidental podcaster and is now Editor of the Computer Skills, 3D & Motion Graphics and Music & Audio sections of Envato Tuts+
johnny_winter
Weekly email summary