How To Set Up Custom Keyboard Shortcuts on Your Mac

Keyboard shortcuts have been at the heart of the Mac experience for ages. We Mac users are all about maximum efficiency and minimum effort and keyboard shortcuts provide an excellent means to this goal. Why would you ever drag your mouse all the way to that little button that closes a window? A quick Command-W gets the same result in a fraction of the time.

Despite the remarkable shortcut integration, both across Apple and third party apps, there will always be gaps in functionality; that one shortcut that you wish existed but doesn't. Fortunately, the problem is not an insurmountable one. There are several ways to set yourself up some custom shortcuts and today we're going to look at some of the best methods from both a native and third party perspective.

The first way to go about assigning custom shortcuts across your system is to go with Apple's built-in method, which is a little bit hidden in System Preferences. We'll go through this step by step so that you can follow along even if you're a complete beginner.

The first thing you want to do is launch System Preferences. You can access this by clicking on the Apple menu in the upper left (fourth item from the top).

Alternatively, always remember that Spotlight is actually a pretty decent application launcher. Hit your shortcut (Command-Space by default) to bring up Spotlight and simply begin typing "System Preferences." Odds are, by the time you type "Sys" the correct option will be highlighted and you can hit return to launch. 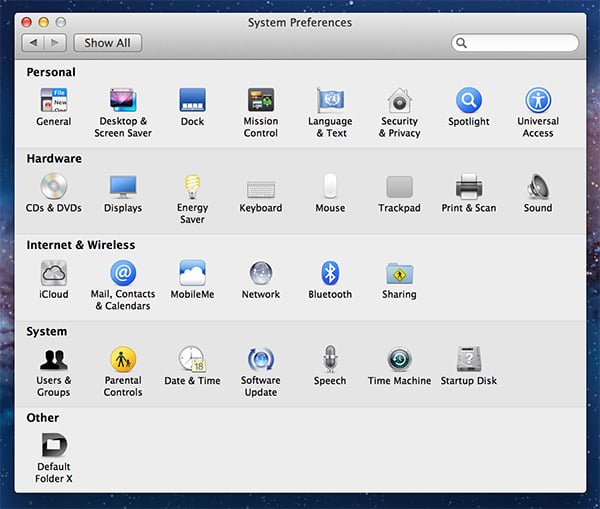 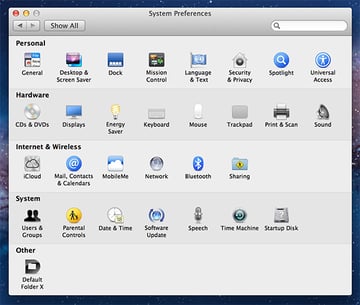 There's no dedicated preference pane for Keyboard Shortcuts, instead there's one for all things keyboard related. This should be in the "Hardware" row in your System Preference window. Simply click to launch. 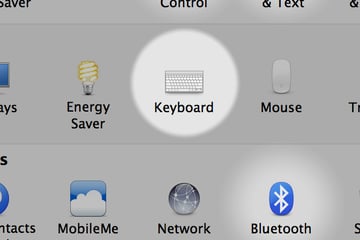 The keyboard preference pane is split into two tabs. The first has a lot of options about the behavior of your keyboard: key repeat rate, how the function keys work, etc. The second tab is where your keyboard shortcuts are controlled, but before we click on that tab, there's something worth checking out in the main Keyboard section.

Click on the "Modifiers" key button in the bottom right of the window. This will pop up a little window that allows you to swap around the functionality of various special keys on your keyboard. For instance, if you never use Caps Lock, you can actually turn it into an extra Command key.

Personally, I don't recommend changing any of these options but if you have a solid reason then it's really not going to harm anything. 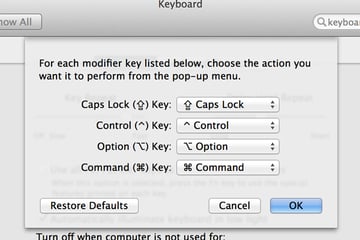 After you're finished with the modifier keys window, click over to the Keyboard Shortcuts tab. This window used to be a big mess but these days it's organized quite nicely with basic categories on the left and the shortcuts within each category on the right.

For all but the last category, you can't add in your own shortcuts, you can merely modify the existing shortcuts. To do this, click on the shortcut syntax on the far right, then once you see that it's in a modifiable state, enter a new shortcut. You don't have to type the symbols or enter the keys one at a time, simply press the keys you'd like to use for the shortcut all at once. 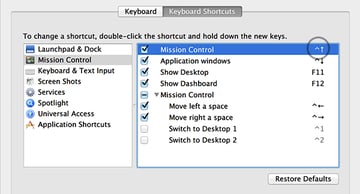 Step 5: Create Your Own Shortcuts

Most of the time, when you come to this Preference Pane, it's not because an existing shortcut bugs you and needs to be changed, it's because there's a missing shortcut that you'd like to add.

To do this, click on the very last category in the list on the left: Application Shortcuts. This will enable two buttons on the bottom that weren't there before which allow you to add and delete your own shortcuts.

When you click the little "+" button to add a new shortcut, you'll see the option to choose between adding a shortcut for all applications or a specific application. The choice is up to you and depends on your needs, but we'll add one that's specific to an application. 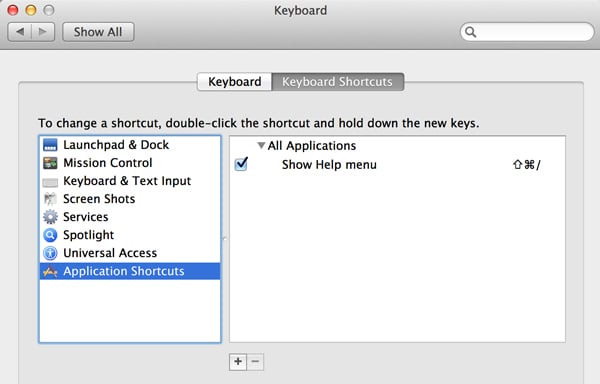 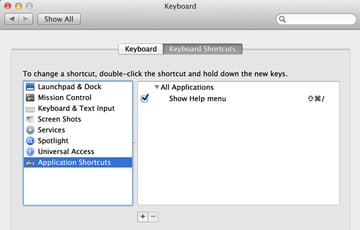 Once you're sure that this is entered correctly, it's time to enter the shortcut in the box and the bottom, just like we did when we were modifying a shortcut before. Try to choose something unique that's not already used for that application. I'll enter "⌃⌥⌘L" as my shortcut. From now on, pressing those keys in Safari will reopen the last window. 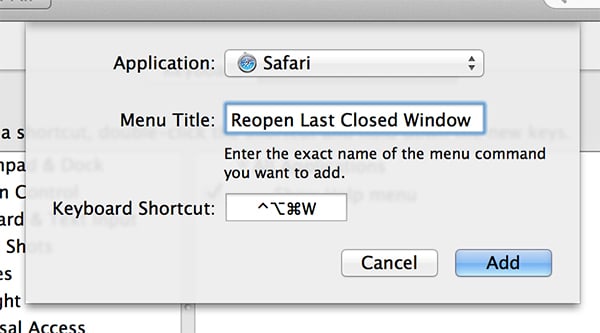 Choose your app, type in the menu item and enter a shortcut.

This same process works for just about every application. The caveat is that the action must be based on a menu item. Otherwise, OS X can't access it through this method.

For standard Apple applications, it's often necessary to go the System Preferences route for customizing keyboard shortcuts. However, many third party apps provide you with the means to add or modify shortcuts right in the app.

One perfect example of this is Photoshop, or for that matter several of the apps in Adobe's Creative Suite. Photoshop and its brethren allow you an impressive level of control over adding and modify keyboard shortcuts, whether you want to modify an existing shortcut or add in a completely new one.

You might think to look in Photoshop's preferences for this functionality, and that is indeed where most apps keep such options, but Photoshop actually sticks it under the "Edit" menu in an item labelled "Keyboard Shortcuts" (⌥⇧⌘K).

This menu works very similarly to the Apple one that we saw above, only it's much more robust. You can choose to change/modify keyboard shortcuts for the Application menus, Panel menus or Tools. You can even save your own custom set of shortcuts that can be transferred to other machines.

Launching Apps and Files with Shortcuts

In addition to assigning shortcuts to menu items and specific application actions, a common desire that crops up with many Mac users is to actually launch a file or application with a dedicated shortcut. These "global shortcuts" work from anywhere in the system and are very useful when assigned to your most used apps and files.

To implement this functionality, I recommend picking yourself up a good app launcher, many of which have global keyboard shortcut functionality.

The current application launcher favorite among many Mac users is Alfred. It strikes a perfect balance between being powerful and super easy to use. Other launchers may require lengthy manuals to get started, but Alfred is so intuitive that you'll require little to no instruction to use it effectively.

Though Alfred is free, the Powerpack is required to use the global shortcut feature. At £15, it's not super cheap but the app is definitely worth it. My statistics screen informs me that I use Alfred upwards of twenty times per day, that's one useful application! 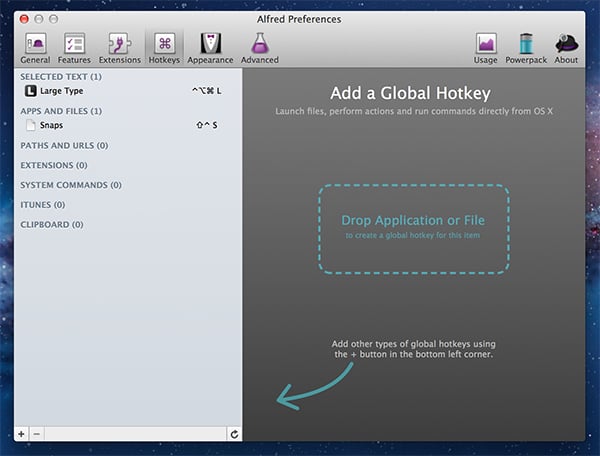 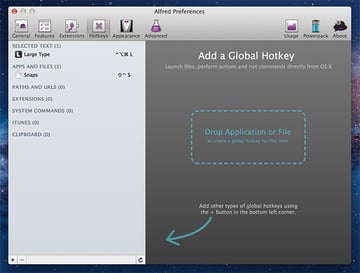 With the Powerpack installed, navigate to the "Hotkeys" tab in Alfred's Preferences window. From here, you simply drag in a file or application to set up a global launch shortcut for it. There's also a little "+" button in the bottom left to set up shortcuts for several tasks such as searching the web or grabbing a folder's path.

Long before Alfred graced the Mac, Quicksilver was the reigning app launcher. It has a long, sordid history but it is now an open source project and works great with the latest versions of OS X.

Quicksilver is completely free so if you're not eager to drop the cash on the Alfred Powerpack, this might be a good option for you. Admittedly, Quicksilver's advanced functionality has a higher learning curve than Alfred but it's a super powerful app that only gets more enjoyable as you dive deeper into its functionality.

To use Quicksilver's global hotkey functionality, launch the preferences window and navigate to the "Triggers" tab. From here, hit the little "+" button on the bottom and choose the Hotkey option. 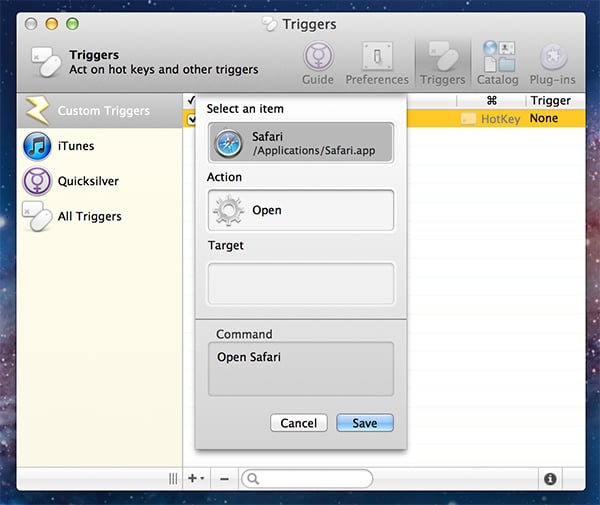 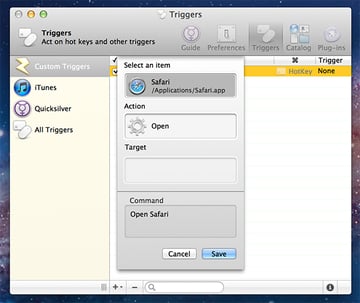 Setting up a Quicksilver Trigger

The Quicksilver Hotkey functionality is actually really awesome. Adding in a new trigger is as easy as setting up a standard Quicksilver workflow. If you want to set up a trigger to launch Safari, enter "Safari" in the first panel, then "Open" in the next. Alfred allows for some really complicated workflows so you can do a lot more than open apps with this functionality: send emails, perform clipboard actions and more.

Once you're finished setting up the workflow, double click on the Trigger portion on the right side of the window to slide out a panel that will allow you to assign a custom keyboard shortcut and set a bunch of options for that trigger's functionality. 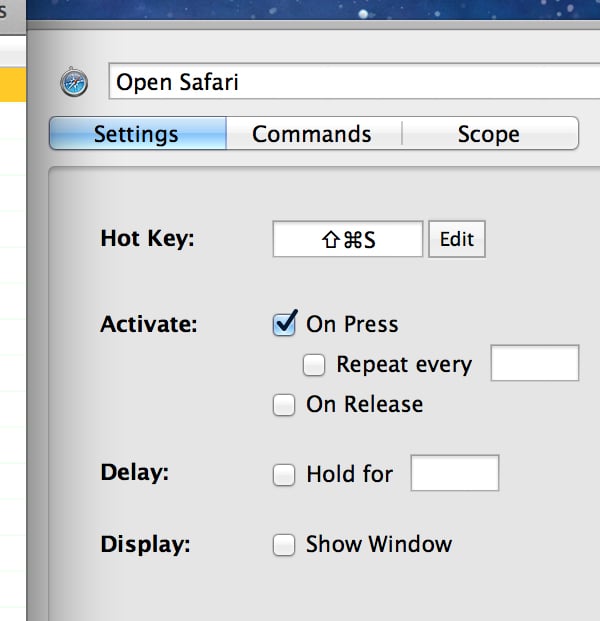 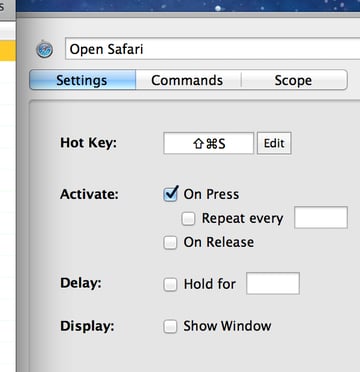 How Do You Set Up Shortcuts?

Between the built-in OS X shortcut functionality, app-specific options and the wealth of awesome third party utilities, you should be more than equipped to control every aspect of your Mac with a few quick keystrokes.

Now that you've read my suggestions for setting up custom keyboard shortcuts, it's time for you to chime in and let me know your method. Do you use one of the apps above or something else? What are your favorite custom shortcuts and how have they improved your productivity?