How to Upgrade Your MacBook Pro to an SSD

Following on from the previous post on upgrading your MacBook Pro’s RAM, today we have a tutorial on how to fit your Mac with a speedy Solid-State Drive (SSD). Upgrading RAM was a relatively cheap way to increase the speed of your Mac - it did so by making your Mac run smoother if you have multiple applications open at the same time and generally allowing your Mac to do more without slowing it down - but adding an SSD will be make your laptop run faster than it ever has. The difference can be so large, you’d be forgiven for thinking you’ve got a whole new machine.

SSDs have no moving parts, making them much more rugged and less likely to be damaged if dropped - very useful for laptops - and they have incredible read and write speeds that make your Mac significantly faster than a tradition hard drive. Some SSDs can operate at above 550MB/sec at both reading and writing, whereas you’re unlikely to be able to reach speeds above 200MB/sec with even the best Hard Drives.

The only major downside to SSDs are their cost. However don’t be disheartened. Prices have been falling rapidly year over year, and you’ll be able to find plenty of options for less than $1/GB, whereas a year ago they were around double that price.

Read on to learn about finding the best SSD for your Mac and a step by step guide to installing it. Please note that this was performed on a 2011 MacBook Pro, but the installation will be the same for almost all other MacBook Pros. You may also notice that I don’t have a hard drive in my MacBook and it is in fact already an SSD - this is because I have previously upgraded, but the process is exactly the same if you are upgrading from a hard drive or another SSD.

Tip: You’re going to need two tools to complete this upgrade: a #00 Phillips screwdriver and a Torx T6 screwdriver. You can find these online or at local stores, or you can buy a toolkit which will have all you need and other small useful kit.

You first have to decide which SSD you want in your Mac. While all SSDs from the big brands (like Crucial, Corsair, Intel etc) are likely to be a great step up from your preinstalled Hard Drive, there are some factors to take into consideration.

For example $/GB may be important for you, and some are cheaper for their size, while others are more costly but offer quicker read/write speeds. It’s also worth checking out reviews of SSDs that you may consider buying, because there could be noted firmware issues with that model for example. 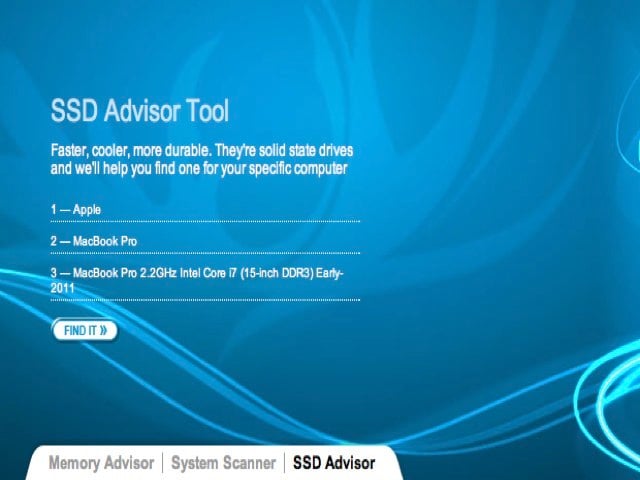 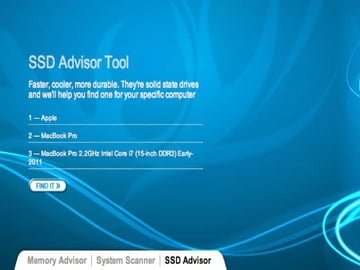 Crucial is my recommendation; I have never had a problem with my SSD from them, and they have a very easy SSD Advisor for choosing the best one for your Mac. If, however, you really want to get one of the best, I would suggest taking a look at the Corsair Neutron GTX.

Step 2: Prepare your Mac for the swap

Unlike changing your RAM, swapping your boot drive (in this case upgrading it to an SSD) will mean you are effectively taking out the disk that your operating system is on and replacing it with another. This is not a problem and is easily resolved with a few choices.

You have the option of installing your operating system as a fresh install by using your install CD that came with your Mac, or if your going to boot Lion or Mountain Lion you can use the a USB drive. If, however, you want to migrate your data from to the new SSD, you also have a few options, most notably using a Time Machine backup or one of these methods.

Tip: Some people suggest cloning data from a hard drive to an SSD, but this is not advisable for multiple reasons. I recommend that you either do a fresh install, or use a Time Machine backup once you’ve installed the SSD.

You really have a great deal of choice when it comes down to deciding what you want for your Mac. Personally, I would recommend that you back up all your important documents to a USB drive or some cloud backup service, and then do a fresh install of Mac OS X. A fresh install tends to make your Mac run faster, as it won’t have any unwanted files or apps that you’ve downloaded and forgotten about.

Before you go removing the bottom of your MacBook Pro, make sure that it is turned off and disconnected from a power source - this is very important. Static can fry your Mac’s internals, so its very important to make sure none of it builds up. Don’t scrub your feet along carpet and no rubbing balloons on your head. It is recommended that you take precautions like grounding yourself with a small wrist band, or use a static-free matt.

Tip: If you don’t have access to any of these try to use a clean hard surface, like a kitchen counter and make sure to touch a metal surface, like the inside of the computer case to discharge any static once you’ve opened it up.

Step 4: Open the Mac and locate the current drive 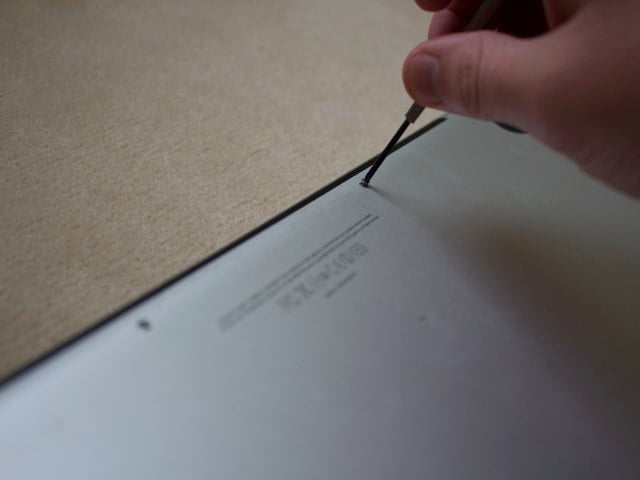 Now that the machine is off and un-plugged (and hopefully on a static free surface) you can take the bottom off your MacBook Pro. To do this, you need to unscrew the 10 screws on the bottom of your Mac. Remember where the screws came from, as the three on the top right are longer and need to be replaced there. The bottom plate may need a little (please remember ‘little’) bit of force to remove it, but once you’ve done that, you can set it aside and bask at the glory of your MacBook Pro's internals for a few seconds. 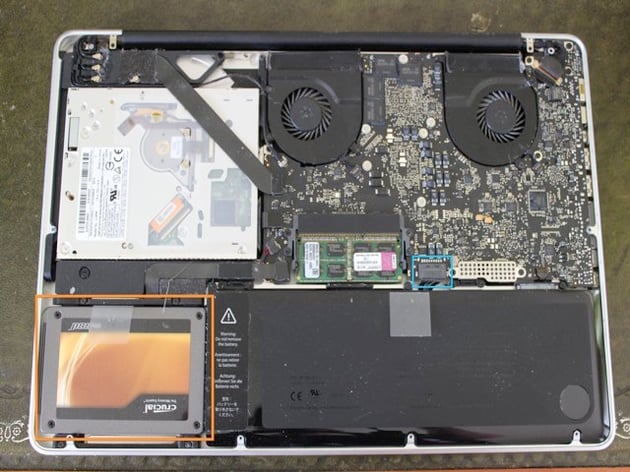 The insides of a MacBook Pro

In the bottom left corner, we have your hard drive - in mine there is an SSD because I’ve already done this before, so don’t worry if it looks different. This is what we will be replacing, so say any final goodbyes and get ready to upgrade it.

One quick step before we do anything to the hard drive is to disconnect the battery. This isn’t absolutely necessary, but it's a very easy to step to make things a little safer and less likely to go wrong. To do this, you can just use your finger nails to gently pry the connector free from the logic board. 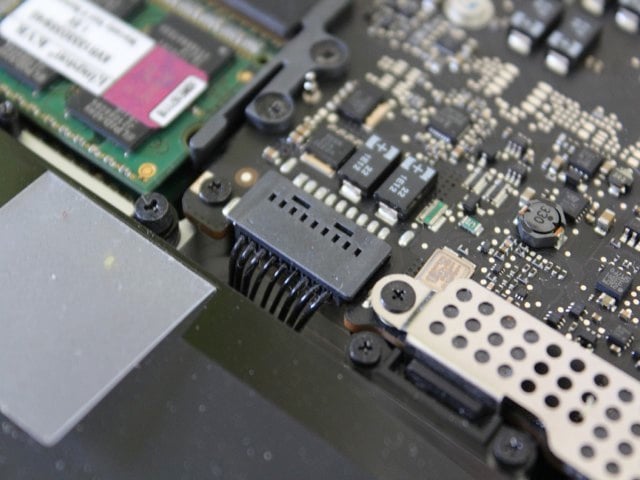 Close up of the battery connector 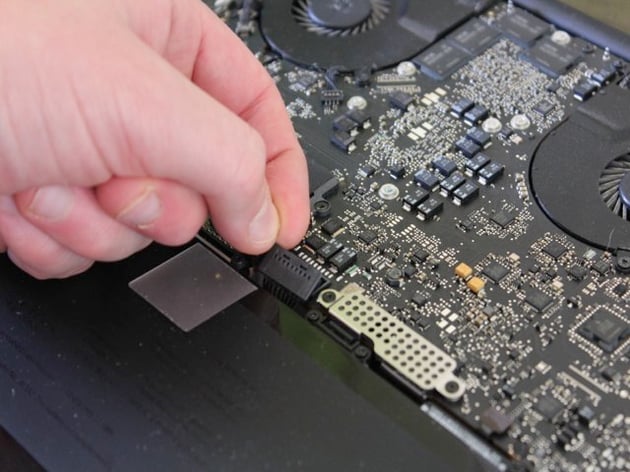 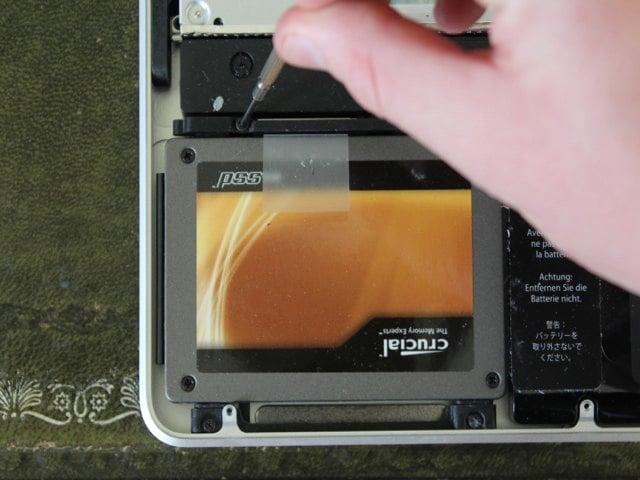 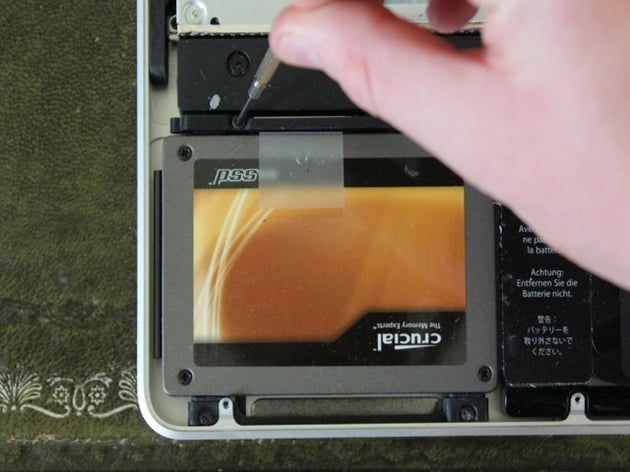 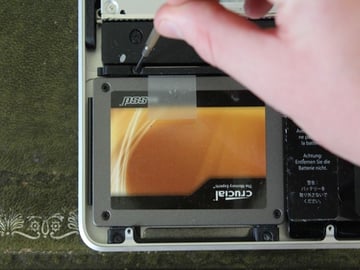 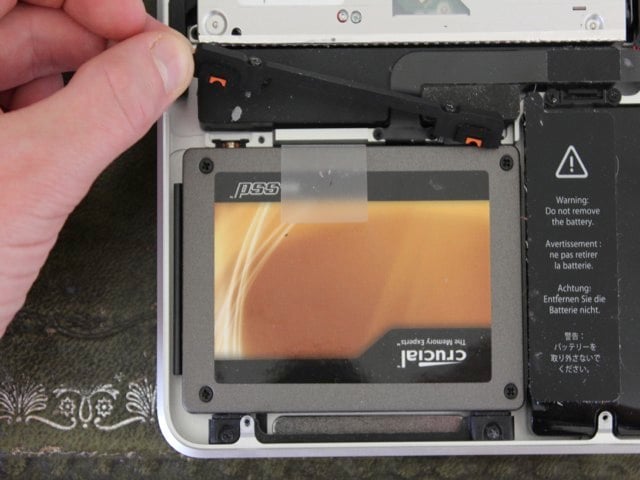 With that removed you can gently lift up your drive using the tab provided - you should only handle the drive by the sides. Please note that it is still attached via the SATA connector. Gently remove the SATA connector from your Hard Drive and place the connector back down on the tray. 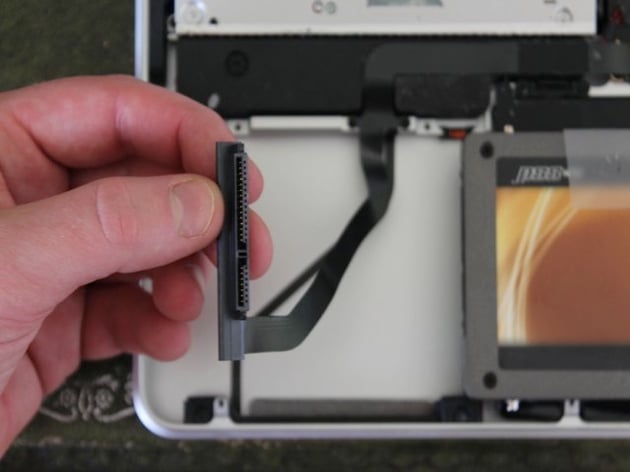 SATA cable
Tip: When removing the SATA connector make sure not to touch the connections (I.e. the bits that go into the drive) as you can risk damaging it.

An SSD it its glory

Your Hard Drive will have four Torx pins that need to be removed (cue Torx T6 screwdriver). Once you're finished, you can now peal off the plastic tab and place it on your new SSD in the same position as it was on the hard drive. You can now put your old drive to the side and get ready to install your new SSD.

First, you need to attach the four Torx mounting pins to this drive - two of these screw into each longer side, just like they did on the previous drive. Then gently connect the SATA cable into the new SSD, making sure you’ve lined them up correctly. 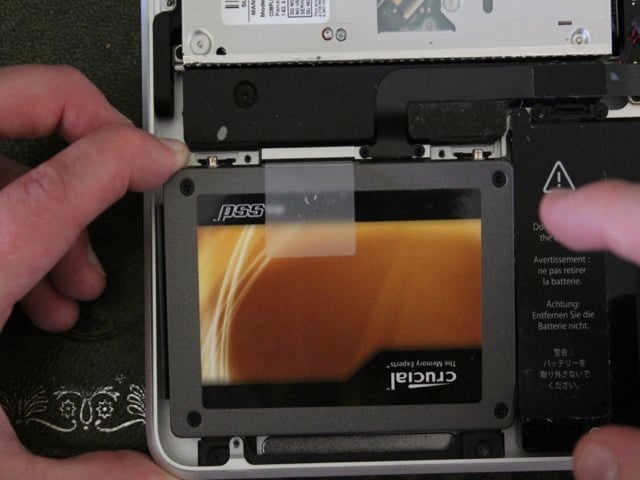 You can now place the SSD back into its bay by positioning the two Torx pins closest to you in their holder and lowering the SSD into its position. Simply replace the retaining bar back onto its original position and screw it back in. 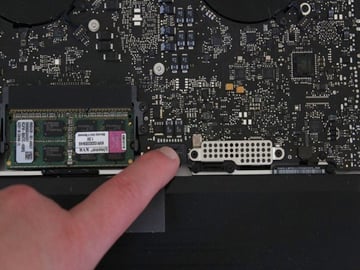 Now it’s time to reattach the battery. To do this, you simply press the connector back into place - be cautious, as with any connection there are pins that can be damaged if it is forced. The last thing to do is put the bottom of the MacBook back on and screw it in, starting with the three longer screws first.

Step 7: Return your Mac to normal

You may now flip your MacBook Pro back over and power it on. Depending on what method of backing up you used, or whether you decided for a fresh install, will determine what your next steps are. If you are either doing a fresh install or a backup from Time Machine, there are a few small steps from here to getting your Mac up and running - if you are using another method such as Carbon Copy Cloner, you should do a quick Google search to see the process.

Assuming you were successful in replacing your drive with an SSD, when you boot up your Mac, you should get to the Mac OS X Utilities section. From here I recommend going into Disk Utility and formatting your drive - not essential because it’s a new drive, but it doesn’t take long and it could avoid problems later on if there was something already on the SSD. Select your drive (should be called Macintosh HD), under the Erase tab select the ‘Mac OS Extended (Journaled)’, pick a name if you want, and click erase.

Now that you have a clean disk, you can close Disk Utility and pick from either a new install of Mountain Lion or restore from a time machine backup. Choose which ever method you would prefer and simply follow Apple’s steps to setting up your Mac with OS X.

Once you have Mountain Lion up and running, you are now ready to start using your new speedy Mac. Having introduced your Mac to an SSD, you should notice a significant boost in performance, most notably boot up times (which some have reported to be as low as 10 seconds with an SSD), and application load times.

Overall, you’re MacBook Pro should feel like a new laptop, and all it needed was a few hundred dollars (maybe less if you have a smaller size) and a bit of time.

Toby O. G. Seers
Toby is a student at university in England, studying History and Politics. He has been using Apple products for several years and has developed a striking fondness for them - leading him to have quite a collection of Apple devices.
Togsy
Looking for something to help kick start your next project?
Envato Market has a range of items for sale to help get you started.