Quick Tip: How to Force Eject a Stuck Disc

If you’ve ever tried to eject a disc and nothing happened, it’s both frustrating and more than a little panic-inducing. Will you get your disc out in one piece without having to crack open your Mac? In this quick tip, we’ll go over a bunch of ways to force eject that stuck disc safely, without causing any damage to either the disc or your Mac.

Getting a Stuck Disc Unstuck

The Obvious Solution: Drag and Drop

First, try dragging the disc from the desktop to the trashcan in the Dock. It’s likely this was one of the first things you tried, but sometimes it’s worth stating the obvious. You can also try locating the disc in the Finder sidebar and clicking the eject icon that appears next to it.

Dragging a disc from the desktop to the trashcan usually ejects it.

Use an App to Eject

Sometimes when Finder can’t eject a disc on its own, an application used to handling discs can. If you have Toast, that’s a good one to try, but even iTunes or DVD Player help you out. Just open the application of your choice and locate the eject command.

This is helpful especially when you know you have a disc stuck in your Mac’s drive, but it’s not visible in Finder. 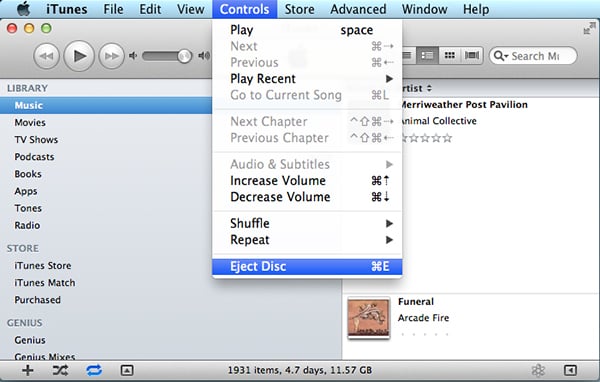 Using the Eject command in iTunes or another application may work when Finder fails.

If the disc is being a real pain and still refuses to clear out, it’s time to roll up the welcome mat and let it know it’s time to go. Your first stop will be Disk Utility, located at /Applications/Utilites/Disk Utility.app. Find your disc in the left sidebar and click the eject button up top, or right-click on the disc and select the eject command. 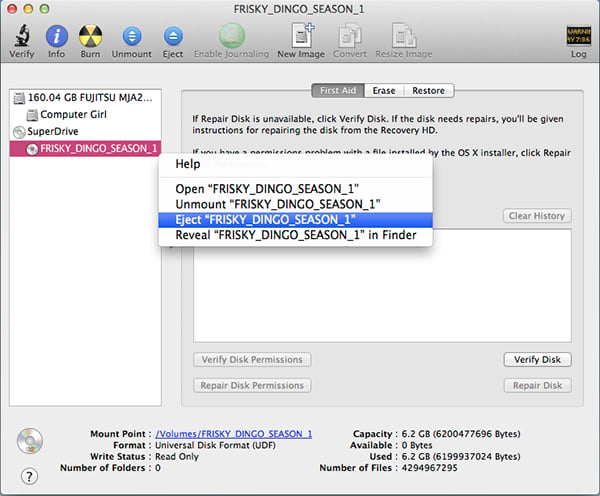 For the really stuck disc, there are some Terminal commands you can use to force eject it. Open Terminal, similarly located at /Applications/Utilites/Terminal.app. The first two eject commands worked the same for me, but if one doesn’t work for you, try the other.

If you have an external drive, you should try a third command:

When Nothing Else Works

Restart your Mac while holding down the mouse or trackpad button. You may think it’s not working, but keep holding the button down until your computer has fully restarted. This has always been my last resort and has never failed to work for me.

However, if it didn’t work for you, restart while holding the Option key to open up the Startup Manager. When you get your selection of bootable volumes, let go of the Option key and press the eject button. This should pop the disc right out, too.

If the stuck disc still won’t eject, fully shut down your computer. Turn it back on, but let it sit idle for ten minutes or so. Hopefully the disc will pop out on its own. Maybe.

If the Disc is Physically Stuck

When none of the above has worked, you may have a disc that’s physically stuck in your drive. No amount of force eject tips is going to get that thing out of there. If you think your disc is jammed, it’s best to stop trying to get it to eject or do anything else really, and consult an Apple Genius or other repair pro.

Tip: Older Macs have a little hole that you can stick a paperclip in to eject the disc. If you're trying to get a disc out of a dusty iMac in the attic, this may work for you.

What Did I Miss?

Do you have any other force eject tips? Have you ever had a disc you just couldn’t get out of your drive? Let us know your solution in the comments!

And if you want to find some useful apps and utilities for your Mac, check out the selection of Mac apps on Envato Market.

OS XTips & Shortcuts
Did you find this post useful?
Yes No
Would you like to provide feedback (optional)?
Cancel Submit
Want a weekly email summary?
Subscribe below and we’ll send you a weekly email summary of all new Computer Skills tutorials. Never miss out on learning about the next big thing.
Sign up

Paula DuPont
Paula DuPont is a New Orleans-based ukulele player, writer, and geek. She has six cats, but only one has a Twitter account.
hellotherepaula
Looking for something to help kick start your next project?
Envato Market has a range of items for sale to help get you started.