Setting Up an Awesome Beater Mac for Less Than $300

This post is part of a series that revisits some of our readers’ favorite articles from the past that still contain awesome and relevant information that you might find useful. This post was originally published on July 8th, 2011.

Let’s face it, Macs are expensive. They are more than worth it of course, but there’s no getting around the fact that any recently released Mac, regardless of model, costs a significant amount of money and is a gleaming thief-magnet, liable to being dropped or lost. I love my iPad and iPhone, but as a freelance writer I need a 'real' computer for significant work when I travel.

I need a Mac that I can lug around, collecting accidental knocks without worry, a Mac that can act as temporary backup if my MacBook Pro ever needs repair. In short, I need an older, expendable Mac that I don't have to worry about. If you need one too, here's some advice on what to look for!

Before we embark on buying an obsolete and unsupported computer, let's look at some more recent alternatives for your beater, backup, or travel-friendly Mac and see if you'll be well served with an older machine:

MacBook Air - The MacBook air is a beautiful and very capable computer. However, it is also expensive and I don’t think I’d feel comfortable leaving an Air at my table in the local coffee shop while I grab a refill, or on the living room floor while my Staffordshire Bull Terrier bounds around at high speed. If you've got the spare cash, this would be an excellent choice of backup or even main computer. I haven't and even if I did, I could never treat a MacBook Air as carelessly as an older, cheaper computer.

Netbook - When fitted out with a lightweight Linux flavour such as Xubuntu, a Netbook can be a great option for a travel friendly computer, but the gain in portability and weight is offset by a small screen and cramped keyboard which would induce RSI for me when typing thousands of words. I'd also like to remain in the OS X environment if possible.

Hackintosh - There are many laptops able to be turned into a Hackintosh, look here for a compatibility chart and Gizmodo has a good guide here to get you started too. A couple of years ago I ran a Dell Mini 9 with OS X Leopard and it performed flawlessly but required a lot of hacking to get up and running, along with a bigger and faster Runcore SSD. Once one has expended the time and effort needed to get this working, it stops being expendable and starts to be a computer I'd not want to leave open to possible abuse.

Though one of the above options may well suit you best, none quite work for me and that's why I'd like to propose buying an iBook G4...

In Defense Of The Venerable PowerPC 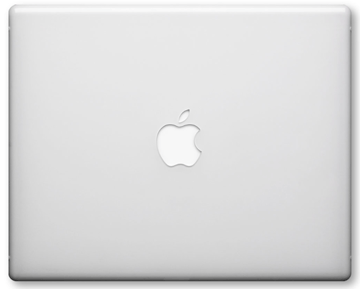 Before Apple adopted Intel processors for their Macs and thus became capable of running Microsoft Windows too, the Motorola designed PowerPC was the engine which powered OS X. Now they are obsolete and almost forgotten in the amnesiac world of tech, but that does not mean that they aren’t still capable machines, able to perform many user's typical day to day computer needs; word processing, basic design, Internet surfing and emailing.

Buying The Right Model For Your Needs 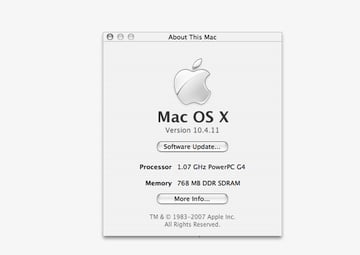 When considering which older Mac to buy, I like to keep one principle in mind and that is, my secondary Mac must be ultimately expendable - which to me means it costs no more than $150 and does not take too much of my time to get up and running.

When deciding which model to choose, there is a trade-off between cost and performance and it is my belief that a G4 iBook is right in that sweet spot. Any older than an iBook G4 and it won't run Tiger or Leopard very effectively, any more powerful and it starts to get too expensive to be a Mac for throwing in a car seat, lending to a friend and leaving around clumsy pets. You'll probably want to be shooting for around 1Ghz processor speed and 1GB RAM, or at least a Mac which is capable of upgrading to 1GB RAM.

If you can purchase your Mac in person then that's ideal because then you can check for any obvious issues but if you’re willing to take your time and accept some risk, great deals are to be had on eBay too. After looking around for a couple of days, I snagged an immaculate iBook 1Ghz G4 for just over $100, cheap enough so that I wouldn't be hurting too much if it turned out to be a lemon.

A couple of additional points to consider when buying your old Mac:

Some iBooks will not come with an Airport wireless card, so make sure yours does or buy one separately if you'll be needing a wireless connection.

When Apple designed the iBook they inexplicably made it very difficult to change the hard drive, so unless you're experienced and confident enough to do this yourself or willing to pay someone who is, your hard drive will be an important part of your new iBook.

OS X UI favorites are present in Tiger, with Spotlight and Expose making an appearance

OS X Panther is really too old and unsupported, plus a lot of good features were introduced with Tiger, such as Spotlight and Expose. A general rule of thumb when choosing between Tiger and Leopard is that if the chip is less than 1Ghz then stick to Tiger - if it’s over 1Ghz and you've got at least 1GB of RAM then give perhaps give Leopard a try, though be warned that if buying a pre-owned version of OS X, you should only buy the retail version, not the grey system disks which are tailored to suit one particular model of Mac.

The iBook range tends to come with hard drives which are uninspiring by today's standards and I’ve got a few bigger and faster HD’s lying around the house so I followed this guide carefully to swap it out - it was a fiddly job and took around 1.5 hours, in all, just about in my threshold of what I'll expend in time for this computer.

RAM is much easier to upgrade and inexpensive too. A visit to Cruicial will soon have you kitted out. Follow this guide to get it installed.

When setting up your iBook, it's sound practice to wipe the hard drive and complete a fresh install. This done, be sure to get fully upgraded and repair permissions. Adobe no longer support flash for PPC so in order to get the best possible performance, you'll need to follow the link given below to grab version 10.1.

Mozilla no longer support PPC either but the awesome TenFourFox provides an optimised version of Firefox 5 for your iBook. It works like a charm and can be used with much needed add-ons like Adblocker Plus and Click To Flash in order to keep your iBook quickly loading pages.

Here are some links to PowerPC and Tiger friendly software:

As a long-time Mac user, I was frankly very pleased by my iBook G4. It boots in acceptable time and wakes up from sleep quickly and I found that using Tiger is no hardship at all, it's a testament to Apple's excellent forward-thinking development that the OS is still so usable and stable. Programs take longer to load than I'm used to on my late-2010 MacBook Pro, but once they do load, they are responsive. I've actually grown to like the older, more springy keyboard of my iBook very much over the last couple of weeks and look forward to using it more in the future.

I know that to some extent I'm going to be preaching to the choir here and many within Mac.Appstorm's knowledgeable readership will be well aware of the usefulness of older Mac models. For those who are new to OS X however, the above will hopefully offer an idea of just what you can get out of these old machines, for a fraction of the price that a new Mac commands.