The Complete Guide to Google Drive on a Mac

I've followed the evolution of Google Drive right from the start. What started as a bare bones online word processor in the form of Writely turned into the cloud based productivity suite we know as Google Docs, which finally culminated into an all-in-one digital drive and file sync utility. Google Drive was a long time coming, with speculation that Google would make a Dropbox competitor circling the internet for years now.

Google took their own sweet time to actually launch Drive, but when they finally did, it turned out not to be the dumb digital storage box everyone was expecting. So, not only is it possible for you to store and sync any type of file, but you can also edit most of them from any Internet connected device, and have fast access to your online documents from Google Docs and other apps, as well. After the break, let's learn how to extract the most out of your Google Drive on a Mac.

Surprisingly, the official Google Drive page doesn’t carry the link to download the file. You will have to either sign up for an account or use your existing Google id to access Google Drive on the web. From here, just click on the Download Google Drive link at the lower left corner to get started.

After installation, the app finds itself a nice little spot on the menubar at the top. It just sits there idly, so click on it to bring up the sign in screen. For some reason, the keyboard shortcuts for pasting login credentials weren’t working. Thankfully, a right click allowed me to paste login info to the app.

At the end of a two step Getting Started Wizard, there is the Advanced Setup option that allows you to control your file syncing abilities. 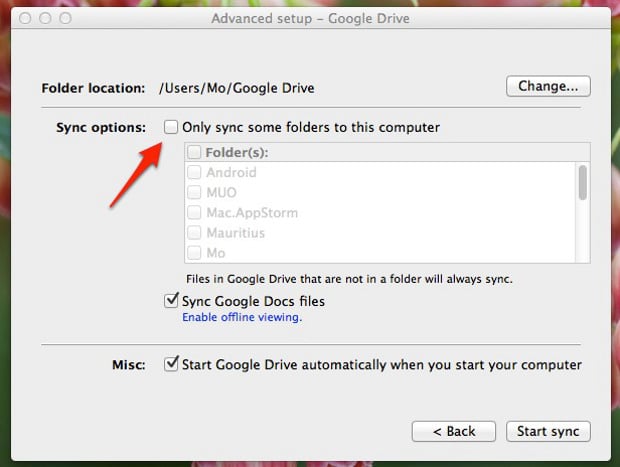 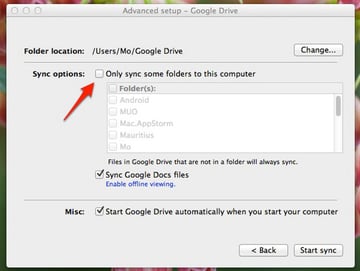 From this screen, Google Drive lets you pick and choose the folders you want to be synced to your Mac locally. Alternatively, you can sync all the files and folders. You might also want to enable Offline Viewing, but some file formats are still not supported for viewing or editing in the offline mode.

A colorful notification alert and a spinning motion keep you informed of the sync process. Given the fact that it’s syncing from Google’s servers, the process should happen at the peak download speed of your Internet connection.

Google Drive quietly creates a place for it on the left sidebar of Finder and all the files and folders can be accessed from this location. Files carry the familiar icons from the web app with a tiny mark indicating whether the file is up to date or if sync is underway. I guess it shouldn’t come as a surprise that you won’t be able to edit or view most of the file formats from apps installed in your machine.

On the brighter side, images, multimedia files, PDFs, and more can be opened in apps of your choice. Zip archives can be extracted and any changes you make are synced back. Files you create, edit or delete either in the web app or elsewhere are instantly synced back without any noticeable lag.

The menubar icon lets you keep an eye on the file storage limits and also has a link to purchase more if necessary. By far, Google Drive has the most affordable prices for adding more room to your cloud storage space, with 25Gb of storage coming in at only $2.49/month.

It is an open secret that I’m a big fan of Google Docs and now, Google Drive. It’s awesome and for a free service, there are so many things going in favor of it. But, I understand that not many people are not as thrilled about Google Drive. One major reason is that it largely doesn’t work like Dropbox. Then, of course, that's not what it's meant to be (though it does most of the things Dropbox is good at).

I admire Dropbox and I use it in all my devices, but Google Drive is a totally different ball game. Yes, there are so many things you couldn’t do with the app - like editing online documents locally - but, this is just the first version and there is a very good chance Google will make this feature available. With much cheaper storage and deep web app integration, it's easily enough for you to leave Dropbox behind if you can get by without simple public file sharing and integration with mobile apps. If you could get past that Dropbox fixation, it wouldn't take long for you to see how useful the app really is and the cloud power it brings to your workflow!