The Complete Guide to the Mac App Store

The Mac App Store is just like the App Store for iOS, it makes it incredibly easy to browse, search for and install apps and games for your Mac. Today we’ll discuss the features of the Mac App Store, how it works and how you can get the most from it.

After the huge success of the App Store for iOS, Apple announced the Mac App Store in October 2010 which launched in January of the following year (it actually predated OS X Lion and launched as an update for OS X Snow Leopard). For developers, it introduced an almost revolutionary way of distributing apps and they would no longer have to worry about serial numbers, payments and how to get apps to users. For users, it provides a central place where they could easily find apps they’d be interested in and an incredibly easy way of purchasing apps. Just think, no more lost serial numbers, running out-of-date software or finding out an app isn’t compatible!

Just like the App Store for iOS, Apple regulates the Mac App Store. Apps require approval before they go on sale, but it provides developers with a central hub to sell their apps and Apple manages all the payments and updates for them. While developers have differing opinions as to whether Apple’s guidelines are too restrictive, we as users do benefit as the likelihood of a malicious app making its way on to the Mac App Store is extremely low.

How the Mac App Store Works

The Mac App Store operates exactly like the App Store for iOS. You simply select an app you want to purchase and it’s immediately downloaded to your Mac’s Applications folder. Apps only need to be downloaded and that’s all the installation they need. There’s no setup or installer to go through, just download the app and you’re ready to go. This is similar to how a lot of apps were developed before the Mac App Store, but some developers still needed an installer to be run first. Even Apple’s own iWork package used an installer before the Mac App Store.

The Mac App Store is another part of the iTunes ecosystem so you simply sign in with your existing iTunes account information (which is your Apple ID) before making a purchase. The default payment method you would normally use within iTunes (such as credit/debit card) is automatically used.

Rather than the Mac App Store being a separate entity, think of it as the iTunes Store for Mac apps. All of Apple’s stores are connected in some way - whether it’s iTunes, Apps, Mac Apps or even the online store for buying a Mac, your Apple ID is your account for all these.

Tip: Because your iTunes credentials are used for making purchases, any iTunes gift cards or any existing balance you have can be used on Mac App Store purchases as well as on iTunes or App Store for iOS purchases!

The Mac App Store features a number of promoted apps

The Mac App Store features a very similar layout to the App Store in iTunes. You’ll see that the main tab called Features has sections such as a Top Paid and Top Free chart for apps, New & Noteworthy and What’s Hot.

On the right-hand side, you have some quick links to features such as getting support or redeeming an iTunes gift card. There’s also a category menu allowing you to easily jump to a particular app category such as Games or Utilities. Apple will occasionally have some specialist categories of apps, such as Game Center, Apps for Photographers and Better Together. These apps all share a common theme or specific purpose so you’re able to compare some similar apps quite easily. 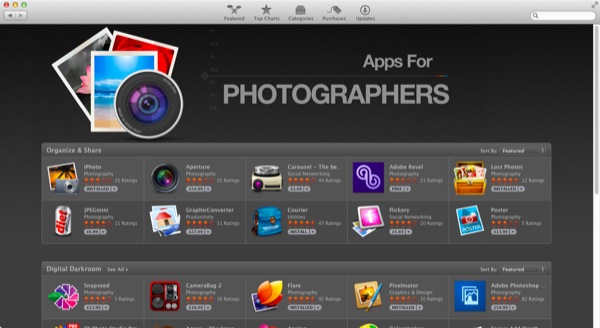 Just like in iTunes, apps are charted based upon their popularity

The Top Charts tab allows you to see what the top paid and free apps are as well as the top grossing. Apps can be broken down by category and you can sort the apps based upon bestselling or the app’s name.

You can view the entire chart... 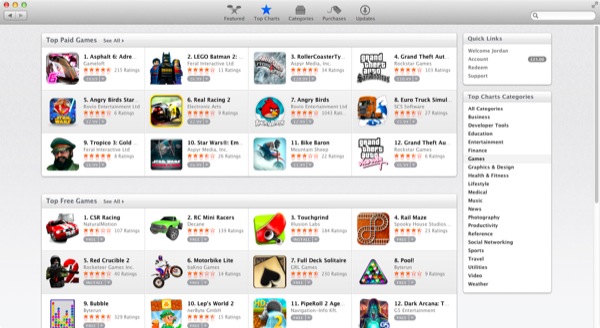 ...or even filter by category

While some apps may be very popular for a short time, the top grossing chart displays the apps that have made the most money. Sometimes an app will be reduced in price for a limited time and it can quickly jump to the top of the paid chart. The top grossing chart is a way of going beyond promotional prices so that a more realistic view of how popular an app can be.

Tip: Remember, an app that’s riding high in the paid or free chart is only one indication of whether it’s good or not. Check the grossing chart as well as app reviews! 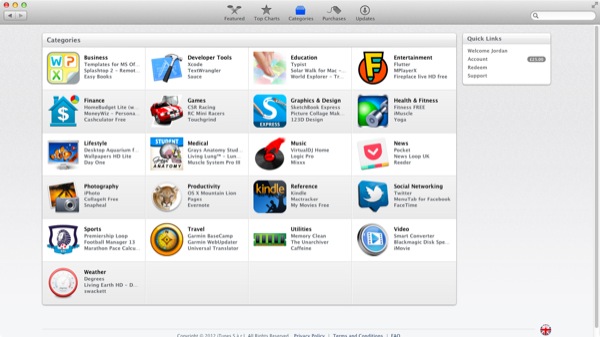 Browsing the Mac App Store by category is easy and the Categories tab allows you to go to the category of your choice. The view for each category lists the top three free or paid apps of that category and the top app’s icon is displayed as the category icon. In our screenshot above, we can see iPhoto is used as the icon for the Photography category and Xcode is used to denote Developer Tools.

The Categories tab looks almost the same as the Featured tab. When we view the Photography category we can see the familiar layout of the charts on the right-hand side but instead of some editor picks and new and noteworthy apps, we see a grid of the latest of all available photography apps.

You can click See All if you wish to start browsing all apps within the category.

There are so many different genres of games that Apple has added additional sub-categories to help you find what you’re looking for. The layout is almost identical to the Featured section with sub-sections called New and Noteworthy. On the right-hand side is a quick way to view some specific genres such as Retro, Adventure and Role-Playing. 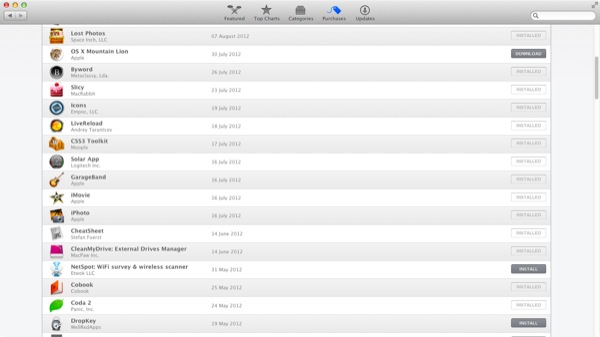 This is a tab you’ll become very familiar with! From here you can see all the apps you’ve ever purchased on the Mac App Store. If an app has been downloaded and is currently in your Applications folder, it will be marked as Installed. If it’s not already downloaded on your Mac, you can click Install to re-download it at no additional charge.

For example, if you were to purchase Pages, you could install it on your MacBook Pro as well as your iMac as long as you’re signed into the Mac App Store with the same account information - you don’t have to buy it again for another computer. This is a great feature and if you’re someone who uses multiple Macs and will save you a lot of money!

Tip: Sometimes apps are removed from the Mac App Store or are no longer available. In most cases, you are still able to download the app via the Purchased tab.

The Mac App Store manages app updates automatically for you

When an update is released, the app’s page will advise you what’s new in the update as well as any additional features or fixes.

If you’re using Mountain Lion, you will have noticed that OS X’s built-in Software Update is also now part of this tab of the Mac App Store now. You can simultaneously download OS X and third party updates at the same time.

Now we’ve covered all the tabs of the Mac App Store, it’s time to look at an actual app!

A typical app page listing on the Mac App Store

Selecting an app will bring up the app’s page. On this page will be the app’s icon and description, as well as screenshots of the app. A little further down will be reviews of the app.

Before purchasing an app, you should always check the app’s information regarding system requirements as well as when it was last updated, it’s size and rating.

You will notice a small down arrow on the right-side of the price box, this lets you share the app via email, Twitter, Facebook or Messages as well as copying the link.

Purchasing apps from the Mac App Store is as easy as buying music or iOS apps from iTunes. Simply select the app you want to purchase and click the price of it. You will then need to confirm you wish to purchase and download the app and then enter your iTunes account password. Once done, your app will start downloading immediately.

Once you’ve confirmed the app’s purchase, the button changes

As soon as the download process starts, you will be able to see it’s progress as part of the app’s icon in the Applications folder or Launchpad.

View of the downloading app via the Applications folder

View of the downloading app via Launchpad

If you had any iTunes gift card balance on your account, that is used to pay for any apps first before it charges you.

In this guide, we’ve explained how the Mac App Store works and how it benefits the user. Not only are apps all available in one place but updating them is a breeze. The Mac App Store is part of the same ecosystem as iTunes and as a result your iTunes gift cards you received over the holidays can be used on purchases from either iTunes, the App Store for iOS or the Mac App Store!

You’ll soon find that the Mac App Store becomes a frequently used app and browsing for apps is less of a chore and more of a hobby.