What is Disk Utility? The Complete Beginner's Guide

Disk Utility is an application that's built into OS X that can perform lots of useful and even scary actions. Experienced users find frequent need of this handy tool but those newer to the Mac experience are often cautioned to steer clear, for good reason. Today we're going to take a very brief look at what Disk Utility is, when you should use it and how to avoid erasing important information while doing so.

This is part of a series of posts that revisits some of our readers’ favorite tutorials from the past that still contain awesome and relevant information that you might find useful. This post was originally published on September 30th, 2011.

Where is Disk Utility?

The first confusing thing you'll notice about Disk Utility is that it can be hard to find. Open up your Applications folder and it's no where in sight. Instead, you have to dig a little deeper and open the Utilities folder, which is found inside the Applications folder. 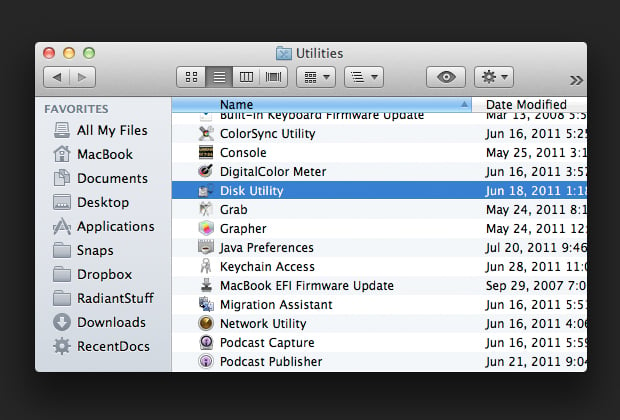 The Utilities folder is inside the Applications folder

In here you'll find a whole bunch of awesome little goodies that are worth checking out. There are tools for everything from color management to graphing data.

Once you find Disk Utility, launch it and you should see a window something like the one below. As you've probably guessed by the app's title, this is a tool for working with hard disks. Any drive connected to your machine, internal or external, should appear in the menu on the left. 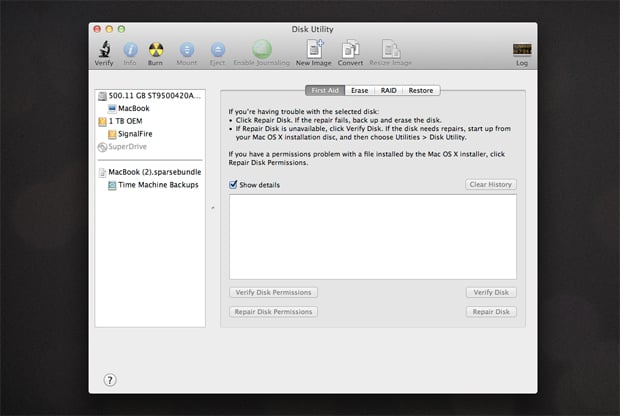 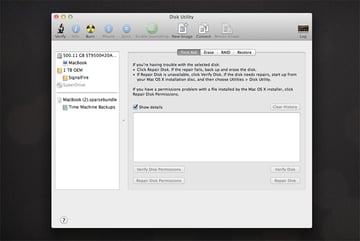 If you select a disk from the list, the bottom of this window will update with information about that item. You can see in the screenshot below that my internal drive is 500GB, but I've already used over 300GB of that.

Unfortunately, Disk Utility won't give you a breakdown of how this storage is being used. For that, you'll need a third party utility like DaisyDisk.

Mac users that have been around for a while have a saying, "When all else fails, repair disk permissions." This action is viewed as a sort of a magic cure all that addresses all types of various untraceable issues.

So what are disk permissions, why do they get screwed up and how do you fix them? The simplified answer is that OS X automatically assigns various files on your computer an owner and further decides the level of interaction other users are allowed to have. Certain user accounts have different access privileges to certain files.

When many things are installed, OS X writes a secret file in /Library/Receipts that tells the System what the permissions should be. Over time, various installations, un-installations, upgrades and the like can wreak havoc on the permissions of certain files. When you "repair disk permissions" you're essentially telling your system to take a look at that secret receipt and fix any files whose permissions don't line up with what they should be.

To do this, click on a disk and then select the "First Aid" tab near the center of the window. From here you can click "Verify Disk Permissions," which will run a check to see if there are any problems. 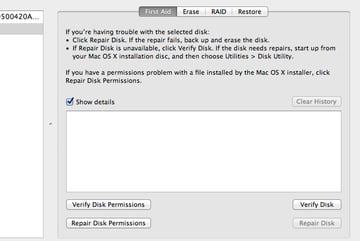 The First Aid tab allows you to verify and repair permissions

If permissions problems are found, you can click "Repair Disk Permissions" to have your Mac automatically fix any of the issues it can find.

How Often Should You Repair Permissions?

Despite the anecdote above, repairing permissions really isn't the end of your problems with OS X. In fact, it's likely a very rare case when this will actually address your problem, which is why I typically take the "when all else fails" approach.

Most users can get by just fine by performing this action with a frequency of 'rare to never.'

Why not daily or weekly you ask? John Gruber sums it up nicely here: "If you are not experiencing any symptoms that would indicate permission-related problems, there is no reason to run Repair Permissions. Repair Permissions is not a periodic maintenance task or a preventive measure." He goes on to argue that repairing permissions is "voodoo" and that "troubleshooting computers is science, not magic."

The other tabs in the center section of Disk Utility are much more self explanatory: Erase, RAID and Restore. These tabs are the tricky ones though and tend to be where people get into trouble by clicking on things they don't understand! 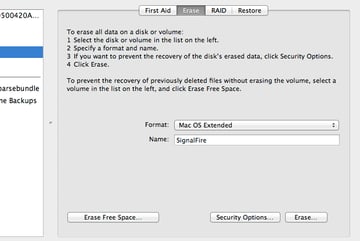 Erase does exactly what it sounds like, so be careful!

If you're fairly astute, you can probably guess that "Erase" clears hard drives of their data. Beware, you can't Command-Z something like this. If you erase a hard drive, it's gone (unless you're familiar with advanced data recovery procedures). My advice: don't even click on this tab unless you fully intend to erase something. If that's the case, make dang sure that you've selected the right drive before proceeding. 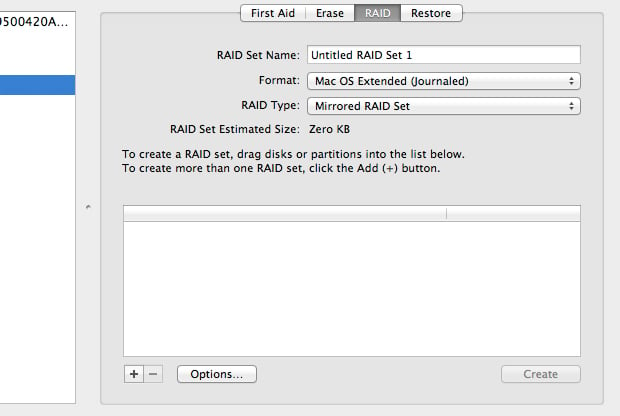 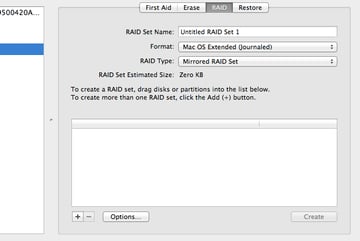 Next up is the RAID tab. Here you can use multiple drives to set up a Mirrored RAID or a Striped Raid. The former is for backup, the latter for performance.

Mirrored RAID simply duplicates the contents of one drive onto another. It's a standard automatic backup so that if your primary drive fails, you don't lose any data. This is crucial for anyone who can't afford to lose their work.

Striped RAID is a little different. According to Apple, a Striped RAID Set "stores files in segments ('stripes') across all the disks in the set. Stripping improves the performance of applications that use large amounts of data."

Restore is a bit of a misnomer. To understand what this tab is for, imagine that it says "duplicate." Basically, the Restore feature allows you to copy the complete contents of a hard drive to a different location.

It's a pretty simple tool with almost no options: just select your source and your destination and click "Restore" to initiate the copy. If you're looking for something a little more robust, check out Carbon Copy Cloner.

Another great use of Disk Utility is to create disk images. The term "disk image" simply refers to a single file that contains the entire contents of a drive. You can create a disk image of a desktop drive, portable drive or even a DVD. This is typically the format used to create a clone of a hard drive and to distribute software.

To create a disk image, simply click on the desired drive on the left and then hit the "New Image" button. Here you can name the image and set both its destination and encryption.

To read more about creating disk images with Disk Utility, check out our article on this very topic.

The last thing we'll discuss about Disk Utility is the most prominent: the strip of buttons along the top. 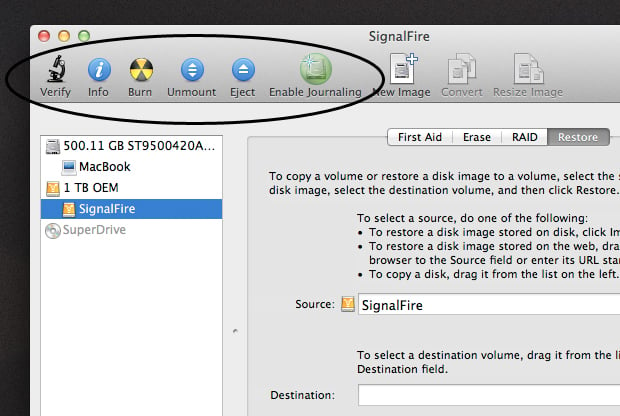 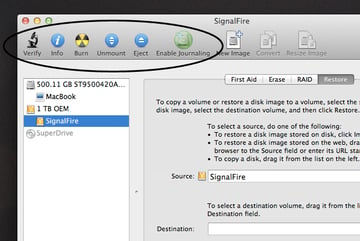 Verify
The first of these is "Verify" which is basically just a quick way to check on a disc. Your Mac will take a quick look and report any problems that it finds.

Info
Next up is "Info," which is essentially an extension of the basic information we saw at the beginning of this article. This button pops up a window like the one below. 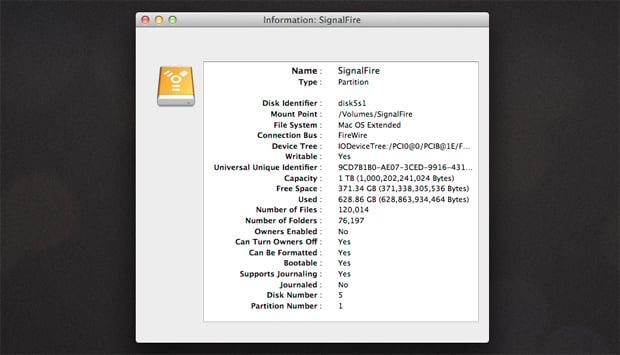 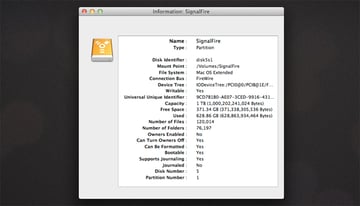 Burn
The "Burn" button will take a disk image and burn it to a CD or DVD. This is useful for making backup disks of various software. You can even use it to make a Lion Boot Disc.

Unmount/Eject
If you've spent any time at all using external drives, you're familiar with mounting and ejecting. When you plug a drive in, it automatically "mounts" to your desktop. Before unplugging it, it's recommended that you "Eject" the disk by either hitting "Command-E" or dragging it to the trash. Unmount and Eject are functionally the same for external drives, the main difference is that "Eject" will kick out a CD or DVD.

So what happens if you accidentally eject a drive before you're done with it? Do you have to unplug it? This is where the "Mount" button comes in handy. Once a disk is ejected, it becomes unmounted (it doesn't appear in the file system or on the desktop). Hitting "Mount" simply gets it back! Sometimes you'll plug in a drive and nothing will happen, in this cases, pop open Disk Utility and try mounting it.

Enable Journaling
The last button we'll discuss is "Enable Journaling." To help explain what journaling does, I had a look around Apple's help pages. This is their brief and informative description:

"Journaling is a technique that helps protect the integrity of the Mac OS Extended file systems on Mac OS X volumes. It both prevents a disk from getting into an inconsistent state and expedites disk repair if the server fails." (source)

Journaling keeps a continuous record of changes for a given disk so that if a problem does arise, you can return to a previous "safe" state. This is mostly used for servers, which need to avoid downtime as much as possible. It's particularly suited to improve the situation in the event of a power failure.

That sums up the basics of Disk Utility. I hope this guide has given you a good overview of what is possible with this utility, when you should consider using it and what to avoid when you do use it. Like most built-in tools, there are often better utilities for several of the functions that Disk Utility performs, but you'll find that it's the perfect general use utility to quickly address all types of disk related activities and problems.

Leave a comment below and let us know how often you use Disk Utility. Which operations do you find the most useful?

OS XDisk Utility
Did you find this post useful?
Yes No
Would you like to provide feedback (optional)?
Cancel Submit

Update me weekly
Looking for something to help kick start your next project?
Envato Market has a range of items for sale to help get you started.